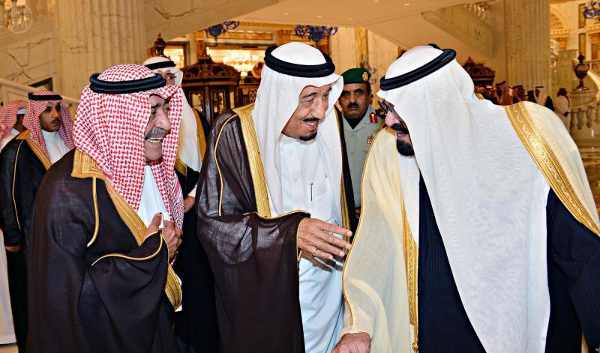 The year is not ending on a high note for three men in the Saudi dynasty whose fingerprints were all over the military coup in Egypt – Prince Bandar, the current intelligence chief; Prince Muqrin, the intelligence chief he replaced, and an aspiring crown prince; and Khalid al-Tuwaijri, president of the royal court and the king’s gatekeeper.

Bandar has become the target of rare criticism in the Saudi press. It is obliquely expressed, but it is unmistakably there. When the well-connected Saudi writer and journalist Jamal Khashoggi wrote in Al Hayat about “local and world intelligence men” no longer being able to change history, establish states or make new leaders, many of his readers understood that he was aiming that at Bandar.

The article continued: “It would be a mistake to defy the power of history with the illusion that the powerful can forge deals and plan the future away from the peoples whose divisions and lack of experience with democracy enabled local, regional and international forces to abuse them.

“Yet, these peoples continue to be in a state of liquidity and rage. They know what they want but they are confused about how to achieve it. What is certain is that they will not wait for a knight mounted on a white horse to lead them toward a new shining dawn. The one-man era is over.”

By the standards of Saudi journalism, this is bold stuff. It’s a reflection of the tensions between rival princes in the House of Saud and the policies that Bandar and his group, which include the current foreign minister, have been aggressively promoting. None of them are going well, and all are interconnected.

Egypt, which should have been pacified months ago, is still in a state of ferment. HA Hellyer, an Egypt analyst for the Royal United Services Institute who is sharply critical of President Mohamed Morsi’s failures in office, describes the clearing of the pro-Morsi sit-ins in August as the most violent state-led crackdown against Egyptians in Egyptian modern history.

It is also expensive. Saudi Arabia and the United Arab Emirates are bankrolling the paralysed state. Sheikh Mansour bin Zayed Al Nahyan, the deputy prime minister of the UAE, dropped a bombshell during a visit by the Egyptian prime minister Hazem el-Beblawi by saying that Arab support for Egypt would not last long. The Emirati’s latest tranche of aid of $3.9bn has been likened to giving blood transfusion to a patient who is bleeding continuously.

Egypt’s debt problems (when Morsi was ousted the foreign and domestic debt was equivalent to 89% of Egypt’s GDP) are not going to be helped by “Saudi-isation” – the attempt to lower the unemployment rate at home by reducing the number of foreign workers, some 9 million people. Hundreds of thousands of workers have already left the kingdom as the Saudi authorities launched a visa crackdown on undocumented workers. Three Ethiopian workers were killed in clashes in Riyadh.

But at least 700,000 Egyptian nationals – that’s over a quarter of the 2.5 million Egyptian foreign workers – also face deportation. They provide much-needed income for the stagnant Egyptian economy, and were one reason why Morsi kept quiet about the Gulf state’s role in destabilizing his period in office.

Egypt is not the only front going wrong for Bandar. If the kingdom made little attempt to conceal its frustration when President Barack Obama opted not to bomb Bashar al-Assad’s forces in Syria after the chemical attack, the current optimism surrounding six-nation talks with Iran in Geneva, and the prospect of a western rapprochement with Tehran, augurs even worse for the kingdom. Here is why.

Saudi Arabia’s support for the military coup in Egypt has affected relations with another important regional player – Turkey, a living example of political Islam succeeding in a secular state. Turkey’s ruling AKP government was a key backer of the ousted Morsi and Tunisia, where a Muslim Brotherhood coalition government still struggles on. The Saudi decision to pull the plug on Morsi has propelled Turkey into the arms of Riyadh’s mortal foe: Iran. The Turkish president Abdullah Gul has invited his Iranian counterpart Hassan Rouhani to pay an official visit to Turkey. The moderate Iranian foreign minister Javad Zarif has described Iranian-Turkish relations as “deep-rooted and brotherly”.

Bandar’s war against political Islam has also made itself felt on Saudi’s troubled border with Yemen. The need to combat the advance of Islamist group al-Islah in Yemen has led the Saudis to support Houthi militias – with whom the kingdom once went to war. A prominent Houthi, Saleh Habreh, was flown via London to meet the Saudi intelligence chief.

Tensions at home and abroad return to one central political fact in the kingdom: rival groups within the Saudi royal family vying for the old king’s attention. As things stand, the crown prince is Prince Salman. He has been nominated by the current king, but this is the last time that a king will be able to nominate a successor. If the crown passes to Salman, his crown prince will be nominated by a body called the allegiance council.

This body favours a rival to the Bandar group. He is Prince Ahmed, the youngest member of the Sudairi brothers, and who appears to be opposed to the direction that the Bandar group is taking Saudi foreign policy. To avert this, the Bandar group is attempting to persuade the king to replace Salman as crown prince with their candidate, Prince Muqrin, thus bypassing the troublesome allegiance council.

Intrigues within the royal court may explain why Saudi foreign policy, which has traditionally been discreet and cautious and conducted largely behind bead curtains, is so overt. It could all be a product of an age-old obsession of absolute monarchies – the battle for succession.