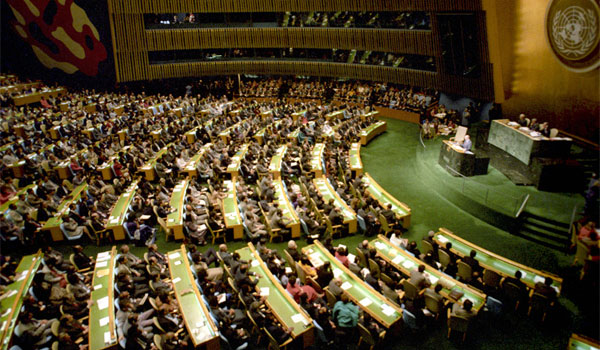 As Israel’s colonization process continues to advance, diminishing prospects for viable Palestinian land reclamation due to the intricacies which have confined the indigenous population to slivers of territory; it is clear that the alleged protection emanating from the history of United Nations resolutions has veered towards establishing a superior international framework for the oppressor, with the aim of invalidating Palestinian narrative.

The rhetoric implied within the resolutions confirms the obvious – Israel has been allowed to explicitly infringe international law due to its strategic allegiances with powerful Western countries, notably the US. A general expectation of UN resolutions is the bequeathing of a passive role enforced upon Palestinians in return for Israel and its allies dictating the political process leading to annihilation. Since the resolution bringing the Partition Plan into effect, Palestinian narrative has been sidelined in order to promote the consolidation of the Jewish state, sanctioned by the same entity which now feigns the protection of the same people abandoned to face massacres, displacement and plunder. Israel faced the necessity of reinventing its narrative through a fabricated historical process which derived support from international institutions, which in turn exacerbated the isolation of Palestinians in terms of history and existence, obliterating the diversity of experiences and transforming decades of displacement and exile into a humanitarian problem detached from its own history.

UN resolutions on Palestine have resulted in a trend through which the ramifications experienced by Palestinians are then articulated in a manner which obliterates the narrative of the oppressed in favour of a hegemonic narrative that has yet to complete its usurpation of Palestine. While resolutions have affirmed the Palestinian right to return, self-determination, the right to resistance, investigations into Israeli ‘practices’ detrimental to Palestinian rights, and countless condemnations of Israel, the framework of alleged concern depicted by the UN has invalidated Palestinian narrative since the allocation of land to Jews through which an extension of colonization was established and nurtured.

So far, UN resolutions have centred upon the necessity of providing inadequate semblances of relief to Palestinians while ensuring the protection of the illegal state. While describing the UN as ineffective would facilitate discourse regarding the inability to establish accountability for Israel’s ongoing crimes against humanity, it is the same ineffectiveness – tantamount to subservience with regard to the corrupt hegemony, which invalidates the articulated ‘concern’ while striving to ensure a multitude of guarantees which safeguard Israel’s illegality. Thriving upon illegality in order to sustain its dominance in determining the extent of human rights violations has become a trend which facilitates the deconstruction of Palestinian history as a humanitarian problem disassociated from the settler-colonial ideology sanctioned through the establishment of the illegal state.

UN complicity in the enforced Zionist alternation of Palestinian narrative does not necessitate any further intervention steeped in the discourse of neutrality. It is an international obligation to insist upon the delegitimisation of the colonial power, thus exposing Israel’s preoccupation not only with regard to sustaining its mythical definition, but also the self-imposed necessity to defend its own illegal status.