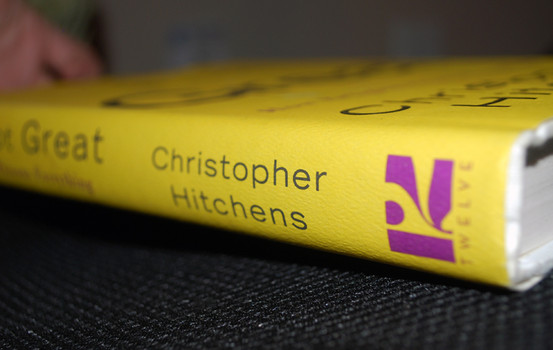 “Verily, the weight of half of disbelief in the world is carried by religious people who made God detestable to His servants.”

God is not Great by Christopher Hitchens should be assigned reading for all those who wear their religion on their sleeves. In this book Hitchens is very good at taking opportunists who made use of religion for their own financial or political gains. Ironically, he’s also an opportunist as he used these individuals’ actions as support for his proposition that “religion poisons everything.”

Reading Hitchens gives a sense of bitterness coming forth on every page as he continually brings forth examples of ideals preached by religious figures from different traditions, all of whom never live up to what they preach. It’s religion reduced to claims with no follow-through. In their hypocrisy, they take advantage of their followers’ yearning for greater meaning and enslave them to make their own material gains. In this, Hitchens’ is desiring to free believers from this hegemony of clergy and that deserves admiration.

He always brings up figures who make religion into a spectacle for their own benefit and amusement in order to show how that renders the ideals preached by those figures as impossible to attain and ultimately meaningless. Although he succeeds in showing that they are meaningless to the lives of those preaching but betraying them, it doesn’t necessarily mean that they are in fact meaningless ideals per se. What he actually does show is the danger of focusing on the rabbis, priests, and imams as opposed to the message being preached. It’s ironic how he accuses different figures of committing the non-sequetor fallacy in order to support their claims, yet Hitchens falls for the same fallacy in his argument. Moreover, it’s clear from his premise that no matter what he was presented with, Hitchens will focus on the bad behaviour of the so-called religious and attribute it to the religion, while at the same time recognize the good behaviour of the religious but attribute it to the individual. This is not to say that he doesn’t acknowledge that there have been bad secularists and/or atheists. He does so and at length. However, he manages to show the interlinking and contribution of those religious institutions, predominantly the Catholic Church, to the atrocities committed by those secularists in a long winded effort to show how religion is still the problem.

To Hitchens, the idea that someone could overcome themselves and go for a higher calling is nonsensical, unless of course it’s a non-theistic higher calling. Throughout the book Hitchens continually issues judgments of what were moral, amoral, or immoral acts of religion. However, he never explains what his absolute basis for judging morality was. Towards the end of the book he takes a jab at relativism when it comes to asserting what is right or wrong, thus indicating that he acknowledges some absolute source, which he’s referring to when casting his morality credences. The best we can discern from his writing style and choice of expressions in describing what he found revolting in religious practice is that this was purely an emotional issue for Hitchens. This problem is further compounded by his reverse induction of what he deems to be moral into the past based on his current emotions about different issues that were shaped mainly by contemporary culture and what he happened to read and be influenced by. That’s not to say he didn’t have valid contentions. He did, and fortunately, or unfortunately for Hitchens, these are in fact addressed at least in the Islamic sources in ways that Hitchens would in fact admire had he given it a chance.

Hitchens’ constant referencing of vast amounts of literature to make his points is rhetorical genius. It distracts the reader from the argument and intimidates them by placing Hitchens in a position of intellectual power that’s unjustified in this circumstance. As the reader is constantly reminded that Hitchens has traveled the world and read vast works of literature, he must know what he’s talking about. He impresses the reader with his extensive offhand remarks that show how well-read he is. Eventually, the reader either concedes to Hitchens or at best has a seed of doubt implanted in their heart.

However impressively well-rounded Hitchens’ literary arsenal might seem, he lacks a cohesive methodological approach. He doesn’t even give full references to his claims and seems to operate on the assumption that you should know exactly where got his information. Furthermore, he’s very selective in his choices, which displays either a lack of academic rigour in his work, or that he purposefully chose his references to support his case against religion. Moreover, anyone familiar with the references he uses to make his allegations against the various traditions would recognize how Hitchens, in spite of his worldly travels and impressive resume of intellectual religious figures he had met, didn’t understand how these traditions are approached, interpreted, or applied. Speaking from the Islamic perspective, I can at least affirm without hesitation that I was more bothered by what seemed like academic dishonesty than his actual allegations against Islam or the Prophet Muhammad PBUH. I also found it peculiar that he would make his allegations, give a sloppy reference to it within the text, and not have the full references given in the references section.

On the philosophical front, Hitchens skilfully reproduces some of the arguments presented by philosophers of his choosing to promote his materialistic/non-theistic worldview, while at the same time making disparaging remarks against opposing views. It’s a form of intellectual bullying to assert the superiority of his conclusions and force the reader to accept them or otherwise risk being labelled as having the intellectual aptitude of an infant (this is another point that I found problematic because Hitchens makes it quite clear that he equates the amount of mechanistic knowledge about the world to how mature and rational humans are, the basis of which he never clearly explains).

To the very end, Hitchens never explains why he thinks the function of religion is to answer material questions about the world, i.e. mechanistic why or how something is the way it is. He simply assumed it and proceeded to show how it failed at it and how much farther we’ve come ever since we adopted enlightenment philosophy and science.

The danger of this book lies in how much of a genius Hitchens was at making numerous equivocations between the so-called religious and the religions they supposedly adhere to. The book is definitely a page-turner and Hitchens is very skillful at evoking emotions of disgust, which he exploits at the right time to have the reader direct them towards religion. On the one hand it’s easy to see how one could come to his conclusions that religion poisons everything given that it seems like 90% of his observations of the so-called religious were at best unsettling. On the other hand however, it’s unacceptable that an intellectual should so easily make such a basic fallacy in thought.

On the whole, this book was a great read. But the argument Hitchens put forth would’ve been more accurately phrased “how hypocritical religious observance poisons everything.” The book is a manual of how one can act under religious terms in ways that will surely drive everyone away from religion and God. It can serve as a wake up call to the masses under the delusion of false religiosity, but on the academic front it most certainly not a trustworthy reference manual for comparative religion.