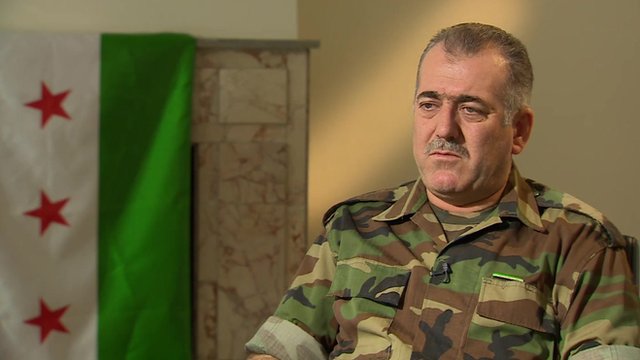 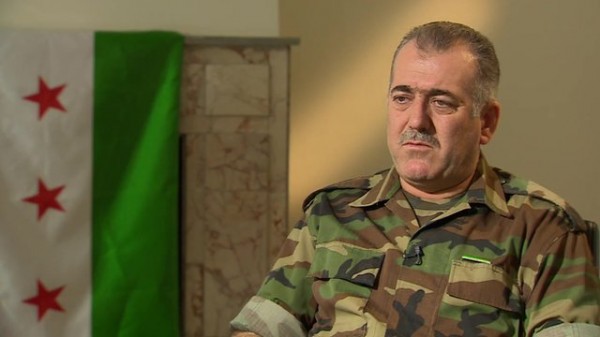 One of the top rebel commanders in Syria has accused “hesitant” British and US policymakers of effectively backing the Syrian government.

Col Abdul Jabbar al-Okaidi said by accepting Syria’s offer to scrap its chemical weapons, the US gave it space to step up conventional attacks.

“The West is supporting the criminal Assad regime,” he told BBC Newsnight.

It was his first foreign interview since stepping down this week as head of the Aleppo military council.

The council forms part of the Free Syrian Army, which the West regards as the main moderate grouping on the rebel side.

“When Mr Obama says chemical weapons are a red line, that gives the green light to conventional weapons,” the colonel told the BBC.

“Ballistic missiles, scuds, air power, rocket launchers, tanks – all these can be used by the regime to kill Syrians. So the Western stance has been very negative towards the Syrian revolution.”

“They have not provided anything. They didn’t stand with the revolution at all.

“If you want to compare the British and French and American position towards Gaddafi and towards Assad, then the difference is enormous.

In response, a spokesperson for the UK Foreign and Commonwealth Office told Newsnight: “The UK recognizes the National Coalition as the sole legitimate representative of the Syrian people and we have been providing the Coalition with extensive support since its formation.

“This year alone we have provided more than £20m ($32m) in support, and the Foreign Secretary has said that between now and the start of the Geneva II process, the UK will announce a further package of support.

“This is separate from the substantial contribution the UK is making to alleviate the humanitarian crisis in Syria and the region.”

“They made a quick decision there by removing the Gaddafi regime and providing help for the Libyan people to remove that dictator – while here we are about to go into the third year and Britain and the whole world is standing by and watching.”

Col Okaidi, a former career officer in the Syrian army, was speaking in the Turkish city of Gaziantep, ahead of a meeting of Syrian opposition politicians in Istanbul.

They will debate whether to attend peace talks in Geneva.

Western and Arab powers, as well as Russia are all pushing for the talks to go ahead.

But Col Okaidi said he opposed the plan.

“It will not succeed while the regime continues to kill people, bomb them from the air and direct artillery fire at them.

“I don’t think under such circumstances anybody can go into negotiations and peace talks with such a criminal regime,” he said.

In another blow to the authority of the Free Syrian Army, following Col Okaidi’s resignation, commanders of some of Syria’s largest rebel brigades have been meeting in Turkey to discuss forming a new Islamist military grouping.

They are calling for the imposition of Sharia law.

Some even want a post-Assad Syria to be an Islamic “caliphate”.

Col Okaidi warned that the failure of the West to supply weapons to moderate rebel groups was strengthening the hand of the better-armed Islamists.

He said: “In terms of weapons and ammunition we have not received anything at all.

“Some communication kits – that’s all, and some ready meals from the US. I don’t know how many because my fighters refused to eat them.”