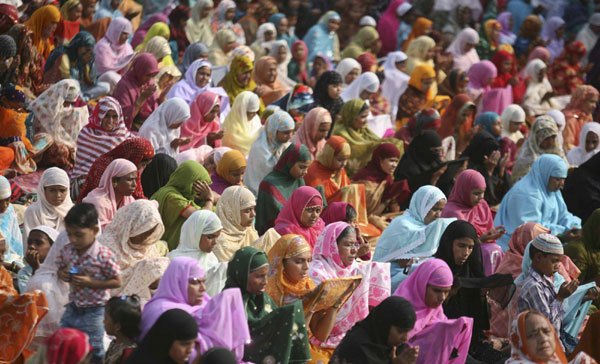 Sectarian tensions between Hindus and Muslims always bubbling under the surface of India’s chaotic and teeming urban streets and which frequently explode into deadly violence appear to be rising in the city of Ahmedabad in Gujarat state. According to a report in The Hindu newspaper, Muslims in the city complaining of increasing discrimination and official neglect in a state ruled by controversial Hindu nationalist Narendra Modi of the Bharatiya Janata Party (BJP) are gradually concentrating in “ghettoes” along the perimeter of the huge and diverse city. In previous years, Muslims lived in various neighborhoods across the city.

One such “Islamic quarter” Juhapur (believed to be the largest Muslim “ghetto” in all of Asia) is crowded with at least 400,000 Muslims. Prior to the communal riots that swept parts of Gujarat in 2002, Juhapur, on the western end of Ahmedabad, only had a population of about 250,000. “Most [Muslim] ghettos have come up on the fringes of the city, away from the Hindu mainstream and lacking in basic amenities,” said an op-ed in The Hindu paper. “[These ghettoes] present a picture of filth, slush and puddles of dirty water. They swarm with flies and mosquitoes. There are no sewerage lines. A foul smell permeates the air. There is no water supply, and whatever is drawn is not always [drinkable].”

Just adjacent to the Muslim enclave of Sajid Row Houses is a clean, affluent Hindu neighborhood called “Dharmabhoomi Society” with all social services available. Muslims blame the BJP-controlled Ahmedabad Municipal Corp. (AMC) for the sharp contrast in living conditions and services between the two neighborhoods. “What more can explain the reality than the fact that ours is a Muslim [neighborhood] and theirs is not?” said Subedar Shaikh, a retired railway employee and resident of Sajid Row. But BJP characterizes complexes like Sajid Row as “illegal Muslim colonies.”

Discrimination against Muslims in Ahmedabad not only shows up in where one can live, but also where they can go to school. The Indian Express newspaper reported that a private school, R. H. Kapadia New High School in a posh part of town, denied a Muslim girl admission allegedly over her faith. The girl’s mother, Zaheera Momin, filed a complaint against school authorities charging illegal discrimination. “[The school registrar] bluntly told me that ‘the school does not admit Muslims’,” Zaheera said.

Similarly, the Times of India reported that during the Muslim festival of Eid, a shopping mall in Ahmedabad charged an “entry fee” to Muslim and other minority shoppers. The Himalaya Mall, among the five largest malls in Ahmedabad, reportedly charged a fee of 20 Rupees (about $0.33) to members of minority groups with the proviso that the payment would be reimbursed if they bought something (otherwise, the fee would be kept).

“The security personnel were being selective. We saw people walking past without paying any fee. When we asked the security guards, they said that they have orders to follow and asked us to pay up. We’re shocked,” said a Muslim shopper named Saiyad Shaikh. However, the mall’s manager, Deepa Bhatnagar, told Times of India that the fee was a normal policy during particularly busy shopping days. “We had employed the same mechanism in the past to keep troublemakers out,” she said. “We are planning to charge entry fee during the coming festive season including [the Hindu festival of] Diwali. The fee is being returned if any purchase is made, so the entry is practically free.” She insisted that there was no attempt to exclude anybody or charge specific persons, adding that 20 rupees is “hardly a deterrent.”

Mall officials also cited that during last year’s Eid holiday, groups of youths clashed in the shopping center causing some damage. The Ahmedabad Mirror also reported on housing discrimination a landlady in the neighborhood of Vastrapur refused to rent a flat to a Muslim girl named Nida Yamin. “As soon as I told the landlady that I am a Muslim, I was denied the accommodation,” Yamin, a Muslim from Delhi, said. “It initially came to me as a cultural shock and I felt embarrassed about the entire episode…. I have to deal with such problems.”

Nida’s friend and would-be roommate, Shwetambera, a Hindu from Bihar, was also interrogated and insulted by the landlady. “I was blatantly asked questions like how will I live with a Muslim roommate and how could I befriend her,” Shwetambera said. “I was surprised. I have stayed in Bangalore and other cities and have had a lot of Muslim friends.” Shwetambera added that “denying someone an accommodation on basis of caste/religion is weird.”

Ironically, Gujarat’s chief minister, Modi, who will lead the BJP in national elections next year, has been softening his rhetoric on Muslims lately. But deeply-entrenched ancient enmities simply cannot be legislated or washed away. “I have always had Hindu friends,” Nida said. “They visit my place and we dine together. In fact, they are keen to know about our culture and hence we exchange social visits…Is it a crime to be born in a Muslim family? God chose me for my family. I could have also taken birth in a Hindu family. But does that really matter?… I respect all religions. I expect the same for my religion.”

Despite her unpleasant experiences, Nida claims that she does not think Ahmedabad is necessarily hostile to Muslims. “I do not dislike the city or the people here, but I believe that their perceptions now need to be changed not only of my religion but of other religions as well,” she said. “I respect all religions and the sentiments of the people. We are Indians and India is a land of multiple religions.”

According to official statistics, Ahmedabad is about 83 percent Hindu and 14 percent Muslim. The very name of the city reflects its strong Islamic heritage Ahmedabad was named after Ahmed Shah I, the sultan of Gujarat’s ruling Muzaffarid dynasty from 1411 until 1442.