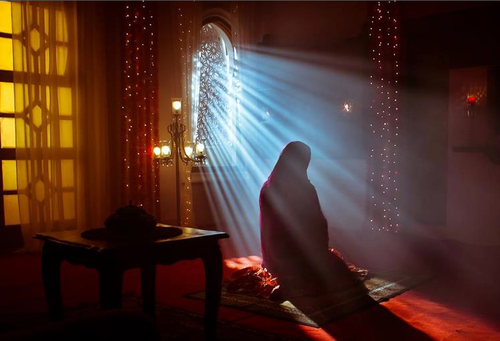 At W.72nd Street in New York City, Broadway intersects Riverside Drive near the Boat Basin. Around the corner, there stood a two story Mosque with a library inside the main entrance. The doors were open. The voice of the Mu’adhin called all the Muslims to prayer.  The melodic enchanting of the Adhan (call to prayer) touched my soul and gently guided me to the path of Islam.

Everyday after work, I walked through the park, but this day was Jumuah (Friday, the day of Assembly for Muslims).  As the Brothers and Sisters rushed pass me I stood still in the doorway watching and listening.  The hand of a Muslim woman touched my shoulder to invite me to step inside.  She walked into the library and offered me a place to sit and said:  “You can sit here for as long as you like.”  As I listened to the Khutbah (Friday Sermon) recitation of the Qur’an and watched the synchronized movements during salah (prayer). I read the booklets that dressed the tables.

This was my first visit to an International Sunni Mosque.  The first masjid (place of worship) I visited was in Harlem, NYC, historically known as The Oldest Mosque, El Hajj Malik Shabazz (Malcolm X -Allah grant him mercy-) built for the Nation of Islam on the corner of W. 116th Street and Lenox Ave.  Alhamdulillaahi rabbil alameen, Brother El Hajj Malik Shabazz, carried the light of Islam to Harlem with him on his journey to Hajj, throughout his probationary life and world travels, until his return to Allah (swt) and the akhirah (hereafter).

I grew up in NYC living among people of different cultures and faiths who spoke English as a second language. My father was Catholic, a migrant from the Caribbean and my Mother was born and raised in Pennsylvania, a member of the (AME) African Methodist Episcopal Church and descendant of enslaved Africans.  My friends at school were sons and daughters of Atheists, Hebrews, Buddhists, Christians, Hindus, and Muslims.

My sojourn began in the NYC public library in the isles of Philosophy and religious books.  I searched for subjects on Universal Law.  When I questioned my elders and extended family members about the purpose of life and God’s plan for human beings, I was often dismissed or given responses that were neither honest nor rational. However, I was given enough information to fill in the blank spaces.

My father passed away the summer after my high school graduation. My first job was an in-take clerk at the city hospital’s drug treatment clinic. My colleagues were nurses, administrators and rehabilitation counselors. I became friends with a counselor who was a Vietnam war veteran. Our early conversations were about the world outside of the U.S. and why he accepted Islam.

Years later our relationship ended after the birth of our child   I moved from New York to Atlanta, GA, he returned to the church of his parents. I attended college and began a career in Graphic Arts & Printing.  Our daughter entered elementary school.  While living in the south I was introduced to phases of Islam as perceived by many different sects of Muslims & Believers.

I discovered one major emotional obstacle was polygamy, the other was appropriate apparel for women.  Although I attended the mosque regularly during the early 1980s, I had not begun to study the Deen (religion proper). I was in a fragmented state of consciousness, existing between the secular and spiritual worlds.

I was introduced to a Muslim man from West Africa who was single with no children from past relationships. He was the son of a polygamist.  I accepted his marriage proposal. Two years into our marriage he decided to convert to Christianity.  He severed his family ties, changed his plan about returning to our Mother Land, Africa. Then started going to night clubs, drinking, spending his salary on gold jewelry and new fashions.  When I decided to leave the marriage, I returned home to New York.  We lived separately until the divorce.  It was then I learned to make du’a (supplication).  I prayed to Allah to help me develop the mind and character of a Muslim.

I started to read.  First, a transliteration of the Holy Qur’an, then the Prophet’s Last Sermon, and the Life of Muhammad. I realized that the benefits of learning the Deen come to the Believers who “patiently” strive and become immersed in the traditional wisdom along with the practice of spiritual rituals.  I understood that the soul of a Muslim is touched by faith and the “diseased” heart is softened and purified only by the mercy of Allah (swt).

I continued to struggle. Allah rewarded me with a righteous husband and a beautiful child. I had an opportunity to live within the Ummah (community), pray during the work day at the masjid; help those in need, enroll our child in an Islamic school and devote my time to study and practice the Pillars of Islam. In 2007 we accepted Allah’s invitation to Hajj, the Pilgrimage to Mecca.

I believe the Holy Qur’an the beginning, Surah 1, Al Fatihah is the bridge to Shahadah, the path to our new home . . . Islam.  Ibadah (worship) became an integral part of my daily life and   served to unite my soul with my mind and spirit. It is the tool I use to develop and maintain taqwah (GOD-Consciousness).     Thirty years ago,

My Shahadah initiated the transformation of my life. My journey began with study of   Islamic morals and manners, virtues of gratitude and patience; the reasons for being “forgiving” and Shari’ah (straight path) the Islamic way and rules of charity, freedom from oppression, social justice and equality for men, women and children.

Tags: Call for Muslims to Prayer conversion to Islam El Hajj Malik Shabazz Friday sermon Guidance to the path of Islam Jumuah prayer Melodic enchanting of Adhan My Shahada Recitation of Quran Voice of Adhan Voice of the Mu’adhan