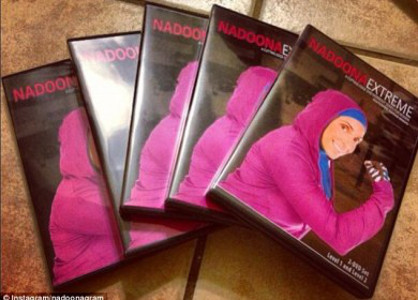 WASHINGTON — Everyone knows losing weight is hard. What’s even harder is trying to lose weight when your friends aren’t supportive of what you’re trying to achieve.

That’s the situation Nadine Abu Jubara found herself in a few years ago. An American Muslim of Palestinian descent living in Florida, Jubara says that, when she decided to try and shed a substantial amount of weight and get healthier, she found few allies in her Muslim community.

At weddings and parties where the tables heaved with Middle Eastern food, she would set about choosing the healthiest items and smallest portions and hear, “Oh come on, take more!” or, “It’s just one day, it’s just one bite!”

“There was almost this discouragement for what was going on, but I still held strong and I kept going and I made it to my goal,” she says.

Thirty kilos later, and lighter, she noticed a dramatic change in people’s reactions.

Many were so impressed by her weight loss that they wanted to know how she did it.

“After about the hundredth time I was asked, ‘What’s your secret?’ I thought, clearly we have some sort of void in this community about this topic,” Jubara says.

Jubara realized that Muslim women have few, if any, resources to help them lose weight and get healthy. Their challenges are unique: observant Muslim women wear modest, body-shrouding garments even while exercising, and face cultural pressures that emphasize lots of food and mealtimes with others, which makes individual eating choices difficult.

Newly svelte and healthy, Jubara says she decided to help other women overcome those challenges.

So the trained civil engineer created a website she called, “Nadoona,” which means “call on us” in Arabic. She says she liked that when you say it in reverse, the name “almost sounds like ‘a new dawn.'” She began charging a modest fee for personalized diet and exercise consultations and one-on-one video coaching.

The response was overwhelmingly positive, not just among Muslims, but also non-Muslim clients, which Jubara hoped would be the case.

“When I thought of this idea, I didn’t want it to eliminate anyone,” she says. “As I always say, fat and cellulite don’t discriminate between races, so I never wanted to have those boundaries and barriers dividing us that we find in so many other arenas. It’s a topic that we can all relate [to].”

Interest was so great that it gave Jubara another idea: “Nadoona Extreme,” billed as “the first ever workout DVD for Muslim women.”

“Transform your body in the comfort of your own home,” it promises.

Jubara released “Nadoona Extreme” at the beginning of November after an initial printing of 2,000 copies. Customers have been preordering the video from the website for weeks.

In the video, Ismail wears athletic pants, a long-sleeved tunic, and a hijab as she performs simple but demanding moves like squats and lunges to a thumping soundtrack.

Because the video is being marketed to Muslim women, Ismail’s workout outfit was the subject of some discussion.

“That’s always a struggle as a Muslim woman in the Western world: how can we fit in and at the same time maintain our religious identity?” she says. “And especially in the fitness world, where the concept of modesty is hard to find. We wanted to have Zainab comply to the religious attire of having her body covered, but at the same time, as we would joke around, not make her look like a bag. People want to see, ‘Okay, who is it that I’m working with?’ Like, ‘Show me what you’ve got,’ kind of a thing. And sometimes when you cover it up with religious attire, you can’t really tell that there’s a [six]-pack under there.”

At the start of the workout, Ismail utters an Arabic phrase known as the “tasmiyah,” which, Jubara explains, gives the workout religious intent and makes it a form of worship. The phrase, “bismallah ir-rahman ir-rahim,” translates as, “In the name of God, the most gracious, the most merciful.”

It’s an obvious signal that Islamic principles are behind the video’s conception and production. But Jubara believes the underlying idea is universal.

“The Prophet, peace be upon him, and our faith, teaches [us] that we [must] take care of our bodies and don’t harm them,” she says. “And overeating and not exercising is a form of harming your body, and so that’s the main driving force behind it…to take care of the one body you have.”

It’s too early to know whether “Nadoona Extreme” will catch on in the intensely competitive, $264 million U.S. fitness DVD industry. But for now at least, this Muslim workout for women can boast that it’s the only one of its kind.