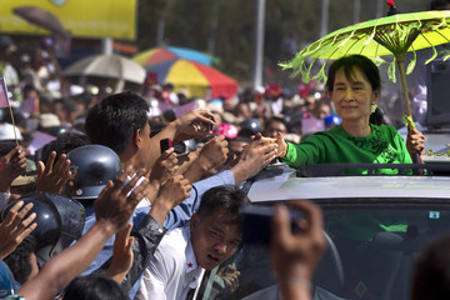 Aung San Suu Kyi, one of the contemporary world’s most celebrated icons of human rights, non-violence and reconciliation, crossed the line into Myanmar’s world of “Buddhist” Islamophobia. Disturbingly, on BBC Radio Four’s flagship programme, “Today”, she characterized the waves of organized violence and Nazi-like hate campaigns currently being committed by her fellow Buddhists – the lay public and clergy alike – as violence of two equal sides, claiming that Burmese Buddhists live in the perceived fear of the rise of great Muslim power worldwide.

As a revered dissident, Aung San Suu Kyi’s idea of ‘freedom from fear’ inspired millions both in Myanmar and world-wide. I think she herself has succumbed to a different type of fear, namely Islamophobia.

Far from recent waves of violence being horizontal communal violence, the truth is that the country’s Rohingya Muslims – numbering 1.3 million out of the country’s 60 million people – have been the subject of a slowly unfolding genocide. This is the conclusion I have drawn from a three-year study that I have just completed with a researcher colleague at the London-based Equal Rights Trust.

A history of ethnic cleansing

In February 1978, the military-controlled state launched its first large-scale operation in Arakan State (now known as Rakhine) in western Myanmar. This first exodus of an estimated 240,000 into neighbouring Bangladesh, took place long before the West’s “war on terror” against “radical Islam.” The Oxford-educated Nobel Peace Prize laureate whom the majority of Burmese, including Muslims, call “Mother Suu” can only be using what she calls the “great rise of Muslim power” as a convenient excuse.

When Aung San Suu Kyi observed that Myanmar’s Buddhists and Muslims, of diverse ethnic backgrounds, fear one another, she was falsely putting them on a moral parity. Worryingly, she displays deep ignorance of the empirical facts: It is the Muslims that have borne the brunt of death, destruction and displacement. The Rohingya and other Muslims make up more than 90 percent of the victims of violence, which has displaced more than 140,000 in Rakhine State. Anti-Muslim violence spread to 11 different towns elsewhere in the country, resulting in 100 Muslim deaths, displacing 12,000 Muslims, and destroying 1,300 Muslim homes and 37 Mosques.Since the 1990s, Rohingya Muslims of northern Arakan state have been confined within a web of security grids where they are subject to extreme restrictions of movement, preventing them from accessing adequate healthcare, education and jobs. Summary executions, rape, extortion, forced labour and other human rights atrocities, mostly at the hands of state security forces, are rampant.Restrictions on marriages and births have resulted in over 60,000 Rohingya children who are not registered or recognized by the Burmese government, in violation of the Rights of Child, hence depriving them of access to basic schooling. In a country that has one of the highest adult literacy rates in Asia, a staggering 80 percent of Rohingya adults are illiterate. The doctor-patient ratio among the Rohingya Muslims is 1 to 75,000 and 1 to 83,000 in the two major ancestral pockets of the Rohingya respectively, as compared with the national average of 1 to 375.

Suu Kyi’s denial of what Human Rights Watch report has called “ethnic cleansing” and “crimes against humanity”, deserves international scrutiny. Her wilful silence on the racially-motivated violence against a Muslim minority, that only makes up about 4 percent of the total population, has led to a growing chorus of international criticism.

However, the details of this slow-burning genocide of the Rohingya which has been set in motion as a matter of state policy since 1978, and the more recent anti-Muslim mass violence, again with state impunity, generally play second fiddle in the media, to Suu Kyi’s failure to condemn it.

The patterns of the systematic elimination of the Rohingya have been largely over-looked by the media over the decades. Even now, it is Suu Kyi, not the ethnic cleansing itself, that the media finds worthy of a headline. Since Myanmar’s military rulers opened up the country – along the Chinese model of capitalism without democratization – the media and international policy hype has been about Myanmar’s emergence as one of the last remaining lucrative, virgin economic markets. Everything else is secondary to this narrative of Myanmar’s Golden Promise.

The Rohingya and other Burmese Muslims are confronted with threats to their very existence. They are already in a weak position as a very small minority, without leverage in the Burmese economy, polity or society. They pose no existential threat to the Buddhist way of life, national security or sovereignty. Still they are in deep trouble, not only because the country’s “Mother Suu” has, in effect, chosen to side with their societal oppressor, namely well-organised, anti-Muslim racists, at every level of society, but also because governments such as the US and the UK have chosen, out of their own strategic needs and commercial pursuits, to embrace the military leadership that has reportedly backed the Islamophobic perpetrators and hate-preachers.