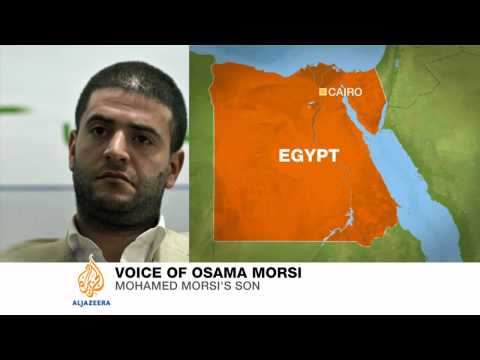 Former President Mohammad Morsi made his first public appearance since he was ousted roughly four months ago today in an Egyptian courtroom. Morsi, along with 14 other senior Muslim Brotherhood devotees, are on trial for inciting violence. But the court hearing was first delayed then postponed until January, it seems, reportedly because the defendants began chanting and disrupting the proceedings.

Morsi, of course, maintained from the beginning that the trial was “illegitimate” – insisting that he was the rightful leader of Egypt, according to the AP:

Emerging from four months in secret detention, Egypt’s deposed Islamist president defiantly rejected a court’s authority to try him Monday, saying he was the country’s “legitimate” leader and those that overthrew him should face charges instead.The trial, which was adjourned until Jan. 8 after several interruptions, marked Mohammed Morsi’s first appearance since he was ousted in a military coup in a step by the military-backed authorities to show respect for due process after international criticism over the secrecy that has shrouded the case.

But Morsi’s rejection of the proceedings signaled the effort would do little to resolve the conflict that has embroiled the Arab world’s most populous country in a fresh round of turmoil.

Morsi was flown by helicopter to the police academy compound where the trial was being held, then transferred to the courtroom in a minibus. The trial was not televised live, but state TV later released video of him buttoning up his dark blue jacket, flanked by policemen, as he stepped out of the minibus.

The New York Times gives a brief summation of why, exactly, Morsi is on trial:

He is charged with inciting the murders of at least three protesters in a night of street fighting between his supporters and opponents outside the presidential palace in December. But rights advocates say the charges are selective at best.

As increasingly aggressive protesters began encircling the palace the night before the protesters were killed — even throwing Molotov cocktails over its walls — the police refused to protect it. So on Dec. 5, leaders of the Muslim Brotherhood publicly called for the president’s Islamist supporters to do the job themselves, by force if necessary.

Hundreds of Islamists arrived that afternoon and forcibly evicted a small encampment the protesters had set up near the palace, and by nightfall thousands of Islamists were gathered to defend the site. Thousands of Mr. Morsi’s opponents attacked the Islamists, and a night of deadly street fighting ensued, with rocks, Molotov cocktails and gunshots coming from both sides.

By morning, at least 11 people were dead, including at least eight supporters of the president and at least three non-Islamists, according to news reports. Prosecutors have not charged anyone over the Islamists’ deaths, and the charges against Mr. Morsi are related to the killing of three non-Islamists.

Morsi is the second deposed Egyptian leader to be tried in three years. Hosni Mubarak first appeared in court in August 2011, months after he was ousted in an 18-day uprising centered in Tahrir Square. Mubarak is still being tried, but has been released from prison.

“We don’t accept what [the authorities] are doing now,” said Khaled Matei, a spokesperson for the Brotherhood’s political wing, the Freedom and Justice Party. “Until now, no one knows where Morsi is…. This is something really crazy. All that they have done since July 3 is crazy.”

Many Egyptians, however, disagree, and instead are hailing the military-backed leadership and. al-Sisi, who forced Morsi out. Opponents accuse Morsi of grabbing power while in office, pushing a religious agenda, sidelining his political opponents, overseeing a flawed constitutional process and failing to effectively govern the country. They say al-Sisi saved the nation.

Still, a segment of the population remains loyal to Morsi and has persisted with protests for months, although the numbers attending demonstrations have dwindled. Much of the recent unrest has flared at rallies on university campuses.

When Morsi first rose to power perhaps no one expected a year later he’d be ousted in a military coup and put on trial. But that happened. And while at the court proceedings today he refused to wear a traditional prison uniform, he’s still a prisoner nontheless.

He better start getting used to that.

This is what Morsi told the judge (middleeastmonitor.com)

Upon his first appearance in court, ousted Egyptian President, Mohammed Morsi, introduced himself before as “the legal president of Egypt,” and waved his hand with the Rabaa al-Adawiyya massacre symbol.

From inside the court, Morsi said, “I am Dr Mohammed Morsi, the legal president of the Arab Republic of Egypt.”

Witnesses said that he raised his hand to show the Rabaa al-Adawiyya massacre symbol.

He said, “I am here because I fell (victim) to a crime, by the traitors who carried out a coup. They removed me from my position. Since I separate the judiciary from having taken part in such a crime, I place responsibility on the judge.”

Morsi also said, “The order to prosecute me is invalid since the public prosecutor is illegal and he was appointed by the coup authorities.”

The hearing session started at 10.00 am, Cairo time. It was planned to take place in the Appeal Court’s headquarters in Cairo, but was later moved to the court at the Police Academy.

Many anti-coup journalists and advocates were prevented from attending the proceedings. The hearing session was then postponed because security sources claimed that there were “security threats.”

Witnesses said that Morsi had chanted, “Down with the military coup.” They said that the other Muslim Brotherhood leaders, who were in the same dock, repeated the same chant after him.