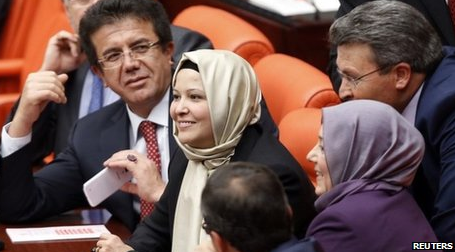 Four Turkish women lawmakers have appeared in parliament in Ankara wearing headscarves – for the first time since 1999.

The MPs are members of the ruling Justice and Development Party (AKP), which has roots in political Islam.

Last month, Turkey lifted the headscarf ban in a number of state institutions.

The ban was one of the most contentious laws in Turkey, pitting backers of the secular constitution against those who favour Islamic rights.

“I will no longer take off my headscarf,” Gonul Bekin Sahkulubey, one of the four MPs, was quoted as saying by Turkey’s Milliyet newspaper.

“I expect everyone to respect my decision.”

A number of fellow MPs gathered around their colleague to take pictures.

Supporters of the women said their move was yet another step towards normalising the wearing of headscarves.

The CHP also said the move was an election gimmick ahead of municipal polls next March.

This is the first time MPs have worn the headscarf in parliament since an abortive attempt in 1999.

Back then, lawmaker Merve Kavakci arrived in the assembly in a headscarf for her swearing-in ceremony – only to be booed out of the building.

The reversal of the ban was part of major political reforms – including new Kurdish rights – announced last month by Mr Erdogan.

He described the move as “a historic moment”.

However, the headscarf ban remains for judges, prosecutors, police officers and members of the armed forces.