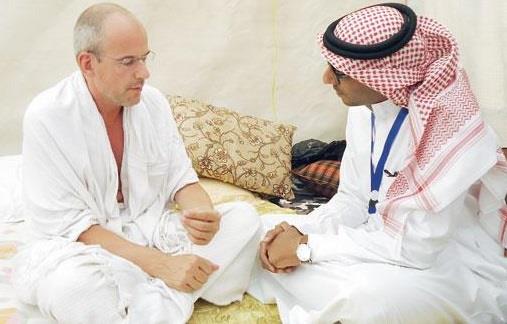 Arnoud van Doorn, former member of the Party for Freedom in Netherlands and a former antagonist of Islam, was one of the thousands who came to Saudi Arabia to perform Hajj, Riyadhconnect reported.

Van Doorn, who until the end of 2011, was a strong supporter of Geert Wilders, the Dutch leader who created the anti-Islamic film ‘Fitna’. He resigned from Freedom Party (PVV) led by extreme rightist Wilders after converting to Islam.

Earlier this year, van Doorn declared in public that he had embraced Islam. In his quest to produce another anti-Islam film, he took to learning more about the religion that he strongly advocated against. He read and learned in depth the Holy Quran and Islamic teachings and later became spiritually inspired by Islam.

Van Doorn had come to Saudi Arabia earlier this year to perform Umrah. According to the report, he expressed his feelings while performing Hajj; said that his eyes were filled with tears of joy ever since he arrived in Makkah. He added that he was living the best moments of his life, reported Akhbaar24.

He said that he found in Islam what he was lacking and searching for in his previous life. He went for Hajj to ask Allah for forgiveness and to pray that Allah erases his past sins. It is his wish to live in Al-Madinah close to the Prophet’s mosque; however his family and work hinder him from fulfilling his wish.

Van Doorn is planning to produce a film that defends Islam and shows the truth, Riyadhconnect reported.