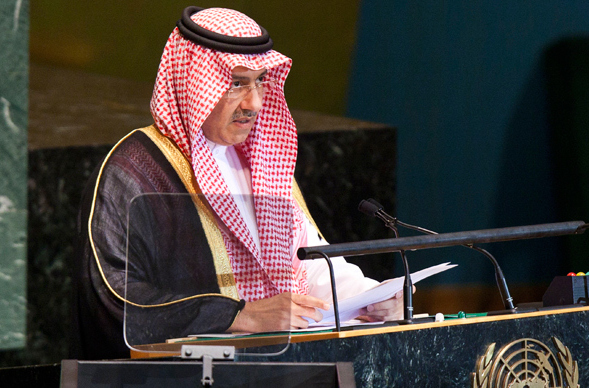 Arab nations have appealed to Saudi Arabia to reverse its unprecedented decision to reject a seat on the United Nations Security Council.

Arab UN ambassadors made the appeal on Saturday after an emergency meeting following Friday’s surprise announcement by the kingdom to decline the seat in a display of anger over the failure of the international community to end the war in Syria.

It added however that it was crucial for Saudi Arabia to represent the Arab and Muslim world on the council “at this important and historical stage, specifically for the Middle East region.”

Many diplomats and analysts have said the Saudi protest was a message to the United States that it wanted a tougher stance on Syria and was angry that Washington had opened contacts with Iran.

The kingdom has been angered by the increasing rapport between Washington and Iran, Saudi Arabia’s old regional foe, which has taken root since President Barack Obama spoke by telephone with Iranian President Hassan Rouhani.

The conservative Islamic kingdom has traditionally avoided big political statements, preferring to wield its influence as world’s top oil exporter, birthplace of Islam and chief Arab ally of the US behind closed doors.

The Russian Foreign Ministry said it was surprised at Saudi Arabia’s move and puzzled by its accusations against the Security Council.

“With its decision, Saudi Arabia has removed itself from the collective work of the UN Security Council to support international peace and security,” the ministry said.

“Saudi Arabia has been working on [getting onto the Security Council] for the last three years. They trained diplomats, male and female, the cream of the Foreign Ministry, our best talented youths. Then somebody made the decision suddenly to pull out.” said a Saudi analyst who asked not to be named.

Saudi Arabia’s withdrawal from the council term starting on January 1 means that the Asia-Pacific group will have to find a new candidate for a new vote by the UN General Assembly unless the Saudis change their mind. Saudi Arabia was elected to the council with Nigeria, Lithuania, Chad and Chile.

All had stood unopposed in the election.