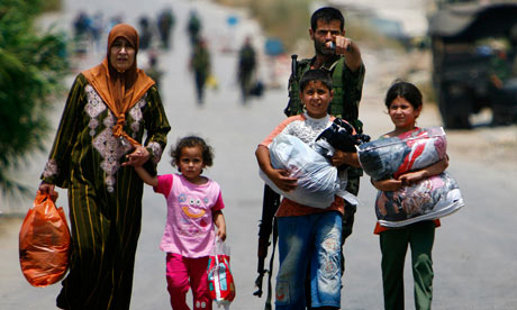 In 1948, approximately 90,000 Palestinians sought refuge in Syria during the Arab-Israeli War.  Sixty-three years later, in 2011, the Palestinians who had created new lives in Syria became refugees yet again, but this time in the wake of the Syrian revolution. On Monday, Georgetown University hosted a discussion titled “Displaced Again: Palestinian Refugees from Syria.”

Samar El Yassir, the Lebanon Country Director for American Near East Refugee Aid (ANERA), talked about the bleak situation Palestinian refugees face in Lebanon. In September 2012, there were only 10,000 Palestinian refugees in the country. But just over a year later that number has increased to about 92,650, according to UNRWA records, and it is estimated to reach 180,000 refugees by the end of 2013. In addition to the Palestinians, there are about 900,000 more refugees in Lebanon who have sought refuge from the oppressive Assad regime. The one million refugees in the country, whose numbers are equivalent to about a third of the population, live in cramped conditions awash with crime and corruption.

The number one concern for refugees in Lebanon is shelter. Refugees either live with host families, rent shelters for between 150 to 300 Lebanese pounds, or squat in partially built structures. Recently, it has become increasingly hard for refugees to pay rent since the Syrian pound has lost much of its value and is worth about three times less than the Lebanese pound. For those who have found jobs, the average salary is about 100 to 300 pounds per month, and this barely covers the price of rent. About 25 percent of all refugee shelters are inadequate, which means they have little or no access to water, have primitive bathrooms, have open vents or doors, and have no kitchen. The incessant struggle with living conditions, especially in the midst of the winter months, only compounds the economic woes that Palestinian refugees face in Lebanon.

Among working age Palestinian refugees, there is an astonishing 90 percent unemployment. This is largely due to the fact that Lebanese law prevents them from working in many sectors of the country’s workforce. As a result, the job market is very competitive, and most families cannot even afford three meals a day. These dire conditions have led many families to give in to child labor in order to maximize their income, which takes children away from their studies. Even children who do not have jobs often are not in school for two main reasons—the curriculum is often taught in French, not Arabic, and there is no space in Lebanon’s classrooms. As El Yassir said, “The best way to ‘normalize’ life is to put children in school.” These educational hardships make it difficult to facilitate change in the region and improve the lives of refugees displaced from Syria.

Noura Erakat, a human rights attorney and activist, gave a brief history on Palestinian refugees in the region and talked about their lack of support and basic rights. In 1948, the Syrian government took great pride in harboring Palestinians and supporting their cause. Once inside Syria, they were allowed to start new lives and essentially lived as equals to the native Syrians. But a few months into the 2011 Syrian revolution, the Assad regime began to target Palestinian refugees, which initiated their massive influx into Lebanon and Jordan.

The future for Palestinian refugees in Lebanon remains bleak. It is imperative that the international community help these oppressed people rebuild their lives, lest we have a lost generation of youth on our hands. Such civil society organizations as ANERA play an important role in improving these refugees’ lives by setting up assistance programs that provide food, shelter, medication, clothes, education, and counseling. But with a million more refugees estimated to flee from the violence in Syria over the next year, it will be essential to improve aid programs in the Levant in order to provide for this vulnerable group.