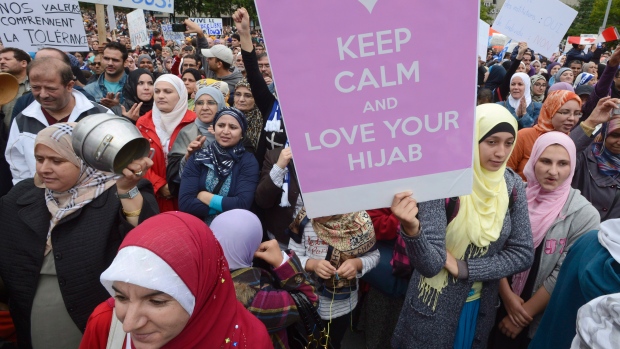 By: Katherine Wilton and Kevin Dougherty

The divisive debate over the proposed Charter of Quebec Values has led to an increase in verbal and physical attacks against Muslim women across the province, a coalition of Quebec women’s centres says.

Some of the attacks have been directed at hijab-wearing women by other women who frequent the centres.

In one case, a Muslim woman was spat at by another woman inside a centre in Montreal.

Attacks have also been reported in the Gaspé and the Eastern Townships.

“We have heard comments saying that women with hijabs don’t have their place in a women’s centre,” said Annie Kouamy, who works at the Centre des Femmes du Verdun. “These comments are coming from other women inside the centres. We are very worried about this.”

Kouamy said she also heard about a Muslim woman who was hit from behind with a shopping cart at a grocery store and told to: “Go back to your country.”

The values charter would bar all public-sector employees from wearing “ostentatious” religious symbols such as the hijab, the kippah and the turban during work hours.

“Verbal denigration, threats and violent behaviour have increased dramatically,” Laroche said in a statement that was issued Wednesday. “Since the beginning of the debate about the charter, women’s security is being compromised.”

Laroche called on the public, the government and the media to “show some respect” and ensure that the debate about the state’s neutrality is conducted peacefully. “All signs of intolerance, racism and violence must stop,” she said.

In Quebec City, Bernard Drainville, the Parti Québécois minister who is piloting the values charter, denied any link between xenophobic attacks and his charter, even though in some cases attackers refer to the charter as their justification.

“No, no,” he replied to reporters. “The debate on the values charter is a necessary debate. It has been too long that we have swept under the carpet all these issues of religious accommodation.” Drainville said the incidents are intolerable and must be condemned.

“Citizens in Quebec have the right to wear religious signs,” he said. “Freedom of religion is a right in Quebec and we have to respect that.”

When a reporter suggested his charter would take away that right, Drainville denied this would be the case, explaining that by banning the wearing of religious signs, public employees would embody the religious neutrality of the state.

“Religious neutrality is the best way to respect freedom of religion and freedom of conscience,” he said.

The first reports of charter-inspired attacks on Muslim women came days after Drainville presented his proposals on Sept. 10.

On Sept 16, Jacques Frémont, president of the province’s human-rights commission, issued a reminder that discrimination on the basis of charter rights, including race, colour, religion, political conviction, ethnic or national origin, can lead to heavy fines for moral and punitive damages.

Quebec’s human-rights commission reports that, in the last four years, it received 3,852 complaints about discrimination.

Kouamy said the women’s centre in Verdun is collecting newspaper clippings about the charter debate so women who use their services can read them and better understand both sides.

“Our centres are open to all women,” she said. “We will not allow women to be stigmatized or discriminated against.”