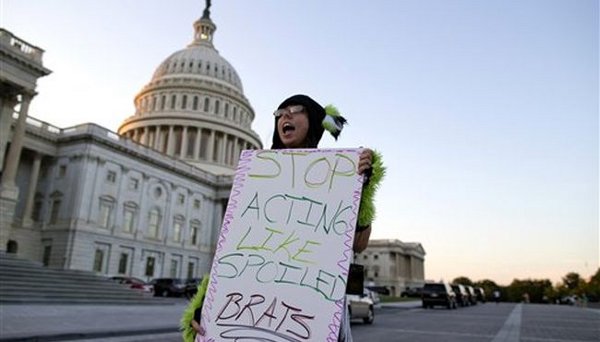 Information Clearing House –  The inability of the media and politicians to focus on the real issues never ceases to amaze.

The real crisis is not the “debt ceiling crisis.” The government shutdown is merely a result of the Republicans using the debt limit ceiling to attempt to block the implementation of Obamacare. If the shutdown persists and becomes a problem, Obama has enough power under the various “war on terror” rulings to declare a national emergency and raise the debt ceiling by executive order. An executive branch that has the power to inter citizens indefinitely and to murder them without due process of law, can certainly set aside a ceiling on debt that jeopardizes the government.

The real crisis is that jobs offshoring by US corporations has permanently lowered US tax revenues by shifting what would have been consumer income, US GDP, and tax base to China, India, and other countries where wages and the cost of living are relatively low. On the spending side, twelve years of wars have inflated annual expenditures. The consequence is a wide deficit gap between revenues and expenditures.

Under the present circumstances, the deficit is too large to be closed. The Federal Reserve covers the deficit by printing $1,000 billion annually with which to purchase Treasury debt and mortgage-backed financial instruments. The use of the printing press on such a large scale undermines the US dollar’s role as reserve currency, the basis for US power. Raising the debt limit simply allows the real crisis to continue. More money will be printed with which to purchase more new debt issues needed to close the gap between revenues and expenditures.

The supply of dollars or dollar denominated assets in foreign hands is vast. (The Social Security system’s large surplus accumulated over a quarter century was borrowed by the Treasury and spent. In its place are non-marketable Treasury IOUs. Consequently, Social Security is one of the largest creditors to the US government.)

The real crisis is the absence of intelligence among economists and policymakers who told us for 20 years not to worry about the offshoring of US jobs, because we were going to have a “New Economy” with better jobs.

As I report each month, not a single one of these “New Economy” jobs has appeared in the payroll jobs statistics or in the Labor Department’s projections of future jobs. Economists and policymakers simply gave away a good chunk of the US economy in order to enhance corporate profits. One result has been to create in the US the worst distribution of income of all developed countries and of many undeveloped ones.

In the scheme of things, the enhanced profits are a short-run thing, because by halting the growth in consumer income, jobs offshoring has destroyed the US consumer market. As I noted in a recent column, on September 19 the New York Times reported what I have reported for years: that US median family income has not increased for a quarter of a century. The lack of consumer income growth is why 5 years of massive monetary and fiscal stimulus have not brought economic recovery.

The real crisis cannot be addressed unless the jobs are brought back home and the wars are stopped. As powerful organized interests oppose any such measures, Congress will pass a new debt ceiling and the real crisis will continue.

Do you hear any mention of the real crisis in the media? Today I was on an international TV program for 25 minutes with the chief financial editor of one of England’s major newspapers. Little doubt but that he was a good-hearted and intelligent fellow, but he had no capability of thinking outside the box. He was unable to comprehend my explanations, and resorted to regurgitations of the media’s ignorance or subservience to Washington’s propaganda.

Among his regurgitations was the “solution” of cutting Social Security. The chief financial editor of a major UK newspaper did not know that for the past quarter of a century Social Security revenues exceeded Social Security payments, and that the Treasury spent the surplus to fund the annual operating expenses of the government, issuing non-marketable IOUs to the Social Security Trust Funds.

Because of the serious decline in the US economy caused by jobs offshoring and financial deregulation, Social Security no longer adds to its surplus. Social Security payments need the supplement to the annual payroll revenues of repayments by the Treasury of the borrowed funds.

The only reasons that Social Security is in trouble is that jobs offshoring and wars have constrained the US Treasury’s ability to make good on its debts except by having the Federal Reserve print money. Every job that is sent abroad does not contribute payroll taxes to Social Security and Medicare.

Insouciant American economists say that manufacturing is an outmoded source of employment, but Chinese manufacturing employment is almost equal to the total US labor force in all occupations, including waitresses and bartenders and hospital orderlies. China’s economy is growing at a rate of 7.5% in real terms, while Western economies cannot move forward and some are regressing.

In order to appease Wall Street, the most corrupt institution in human history, and to prevent Wall Street-financed takeovers of their corporations, executives destroyed the American consumer market by offshoring American incomes in order to enhance profits by substituting cheap foreign labor for US labor.

In my opinion, the US economy is not salvageable in its present form. The economy is running out of water resources. The supply that remains is being decimated by fracking. The soil is depleted by glysophate, a requirement of GMO agriculture. The external costs of production are rising (the costs that the corporations impose on the environment and third parties) and possibly exceed the value of the increase in corporate output. Economists are incapable of independent thought, and elected representatives are dependent on the private interests that finance their campaigns.

It is difficult to imagine a more discouraging situation.

At this time, collapse seems the most likely forecast.

Perhaps out of the ruins, a new, intelligent beginning might occur.

If there are any leaders.