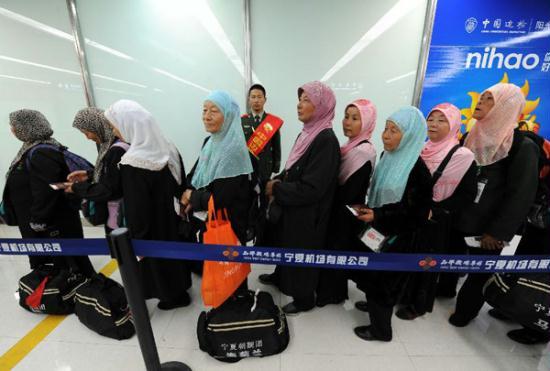 Around 11,000 Chinese Muslims are flying from China to Mecca in Saudi Arabia this year, for the annual Hajj pilgrimage. Last Saturday, the last group took off from Beijing, part of a government-organized trip that’s been running for more than 5 decades.

290 Chinese citizens wait to start their annual pilgrimage to Mecca.

They’re the last group among more than 11,000 Chinese Muslims, taking part in a long running travel initiative organized by the Chinese government.

Islam is the world’s second largest religion, with over a billion followers.

The word Islam means submission to the will of god.

Once a year, Muslims from around the world gather in Mecca, to praise Allah.

China has more than 20 million Muslims, between 1 and 2 percent of the country’s population.

The Chinese government has been helping to send Islamic pilgrims to Mecca since 1955…. and the numbers are increasing year by year.

As the birthplace of Muhammad, it’s regarded as the holiest city in Islam.

But with continued instability in many countries in and around the middle east, there are always security concerns.

For Muslims, the pilgrimage to Mecca is the fifth and final obligation of Islam that every sane adult Muslim must undertake at least once in their lifetime if they can afford it and are physically able. More than 7,000 kilometers distance between Mecca and Beijing makes the pilgrimage the most difficult task for the Chinese Muslims, but the Chinese government is doing all it can to shorten the distance and at the same time, guarantee their safety.