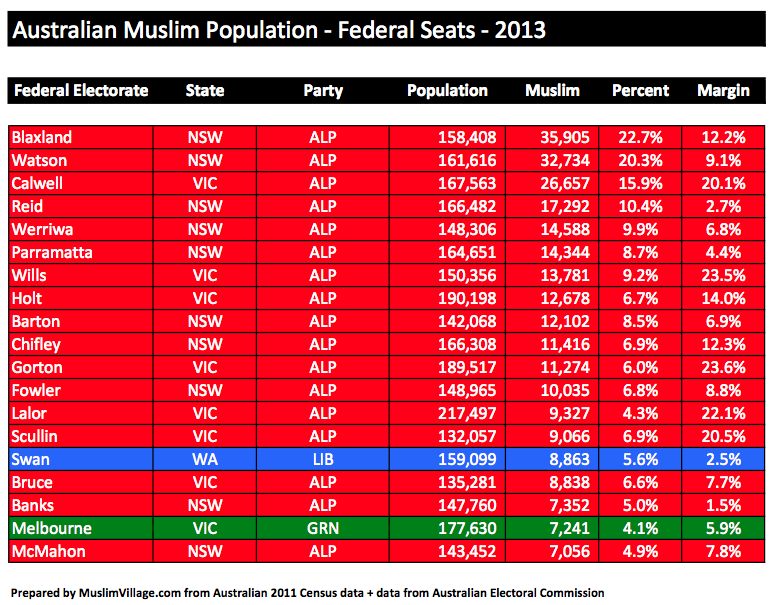 Australian Muslim voters could play a major role in deciding the outcome in up to 5 seats in the Federal election to be held this weekend. As the table above shows, Muslims are significant majorities in a number of seats that will help decide who wins the election. It is thus extremely important that you make your vote count.

This is especially critical for the Senate vote, where according to many election experts, there is a good possibility that Pauline Hanson could grab a seat in NSW with only 2% of the primary vote due to preference deals with other micro parties. If there is a hung senate, she may be one of a few from minor parties – mainly right wing – that hold the balance of power.

This may seem like a dramatic statement, but one only has to examine the many Islamophobic statements on sharia, halal, burqas, jihad, etc from senior Liberal politicians over the last few years to come to this conclusion – see Cory Bernadi, Sophie Mirabella, Concetta Fierravanti-Wells, Kevin Andrews, Bronwyn Bishop, Luke Simpkins, Scott Morrison, Fiona Scott, Ray King and of course the leader Tony Abbott. We have seen many utterances even over the last few weeks of the election campaign to determine that life for an Australian Muslim is not going to be an easy ride under a Liberal government.

On the flip side, does a Kevin Rudd lead Labor deserve another 3 years? After all the infighting and self indulgence over the last 6 years, for many the answer will be no. This despite the many social initiatives and reforms in education, disability and health care that they have proposed and introduced.

In addition, as a Australian Muslim, should we be voting for a Labor party that advocates for same sex marriage? The argument from some is that we live in a secular society that already socially recognises such practices regardless of the law and we need to look at the bigger picture of other issues that directly effect us. But each person voting for Labor – or the Greens – will be indirectly supporting allowing homosexuals to marry. This will play very heavily on many Australian Muslims minds.

So who should you vote for?

MuslimVillage.com has put together an Australian Muslim Voters Guide 2013 to help you decide who should get your vote in this weekend’s Federal Election.

We have analysed the three major parties policies, Labor, Liberal/National and the Greens, to present an explanation of not only the issues that will effect all Australians – see here: Australian Federal Election 2013 – Major Party Positions – but regardless of race or religion, what we believe are the key issues facing Australian Muslims.

We also very highly recommend you use the Vote Compass website. It is an online tool developed by a non-profit group of political scientists and hosted by the ABC that has had an amazing 1.2million users in the last few weeks. You answer a short series of questions to discover which political party best represents your views. The results may surprise you.  Here is the link : http://australia.votecompass.com/home

Another good way to decide who to vote for is to determine which local candidate in your area has been or will better serve your local community needs, and regardless of political affiliation, give them your vote.

Here is some information to help you decide who should get your valuable vote: