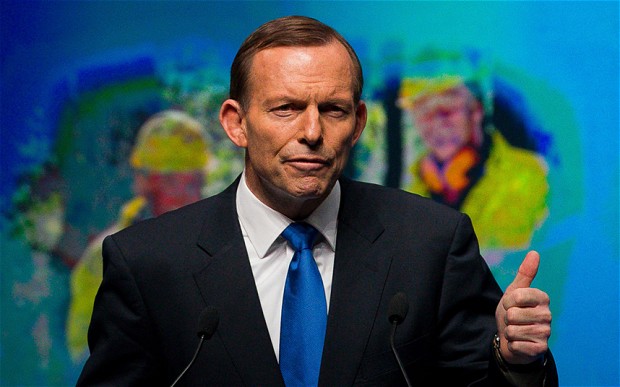 When trying to appeal to Muslim voters in Western Sydney, Tony Abbott, made an outstanding comment to a gathering of five-hundred or so Muslims at an event marking the end of Ramadan, such a comment no doubt impressed upon anyone who gave regard to the values multiculturalism:

“I am the sworn enemy for anyone who seeks to divide Australian over Australian on issues of class, gender, birth place, race and particularly over faith. I believe that all religious faiths seek to come to grips with the complexity of human condition. We have to respect the specialness of that faith to every person.” [1]

The problem was that this was of course Tony Abbott speaking; the same Tony Abbott who has a history of rash Islamophobic comments and a penchant for ‘rewriting’ history with other lies. [2] On this basis, Denise Allen, former Victorian State MP for Benalla is justified in referring to Abbott as a “blatant liar” and a “fraud.” [3]

For the purposes of this article, let us put aside his displayed willingness to stay quiet whilst Islamophobes connected to his own party have made derisive and even bigoted comments about Islam, the following is a brief list of quotes outlining the true nature of Abbott concerning Muslims; an eye-opening reminder for any Muslim or true supporter of multiculturalism.

Only a month after his passionate speech, the one in which he assured his ‘would-be’ Muslim voters that he was a sworn enemy to anyone who would divide Australian over Australian on issues especially pertaining to faith,  Abbott commented on the acceptability of the burqa in Australia, essentially negating what he had said a mere month ago by saying:

”Frankly, it’s not the sort of attire that I would like to see widespread in our streets” [4]

Frankly, it makes little sense to ban a form of attire which some women wear out of choice rather than coercion [5], Abott’s dislike for it to be widespread is not only unrealistic but beside the point.

In their official press release, the Muslim Women’s Association said:

“Surely a country that values freedom and prides itself on its multicultural nature can accept the decision of a small minority of the community to dress in a manner that accords with the tenets of their faith. Such basic human rights are guaranteed in International Human Rights documents that Australia has ratified. Furthermore, freedom of religion is one of the very few rights embedded in our Australian constitution and one which we are disturbed and disappointed to hear is being compromised when it comes to discussions about Muslim Women.” [7]

2) On preachers of hate

During the right-wing Dutch MP Geert Wilders visit, Abbott explained that although Wilders views on Islam were “substantially wrong,” he was nonetheless “entitled to his viewpoint.” [8] Abbott, however, did not deem Taji Mustafa, a Muslim speaker from the UK (who visited Australian roughly during the same period) [9] to be worthy of such a right. Abbott referred to him as a “preacher of hate.” [10]

He also said in reference to him:

“We certainly shouldn’t be giving visas to people who are the people of hate.” [12]

Alarmingly, all of these excitable comments could have been applied to Wilders himself.

At an open event intended for Muslims by Muslims, Abbott took issue to the fact that the event was segregated (which is generally seen as an acceptable practice by those that tend to go to Muslim events):

It’s odd how the leader of the opposition found it all too easy to create a political agenda out of this particular matter when the University of Melbourne’s Vice-Chancellor, Glyn Davis, barely had any objection to said segregation. Davis explained that although he does not personally support segregation, it is well within peoples’ rights to do so at such events, he also further pointed out the hypocritical nature of Abbott’s assertion by saying:

“When Tony Abbott finds it “absolutely extraordinary that a great liberal institution would take a huge leap back into the dark ages”, he defends liberalism by ignoring other liberal values such as tolerance and freedom of assembly.” [14]

When explaining the current crisis in Syria, which has seen the deaths of several innocents, Abbott explained:

This reductionist approach would be laughable were it not for the fact that this was perhaps the next Prime Minister of Australia who was speaking. Current Prime Minister, Kevin Rudd, commented on Abbott’s overly simplistic analysis saying:

“The last time I used the term goodies and baddies, I think was when I was playing cowboys and Indians, in the back garden. I think I stopped doing that at the age of ten.” [16]

He also explained that such a comment proved that Abbott lacked any foreign affairs credibility:

“My single comment to Mr Abbott is this: International relations is more complex than a John Wayne western” [17]

Held up by a woman with a shopping trolley, the following interchange takes place between Abbott and the aforementioned woman:

Old woman with a shopping trolley: I want to be in a country that’s not going to be run by Muslims.

Tony Abbott: I understand what you’re saying ma’am, and as I said the important thing is to make the borders secure and that way people will be happier that the right people are coming to our country. [18]

In other words, does he mean to say that “when I become Prime Minister, I won’t let these Muslims in?”

With all these comments and more, it is no wonder that former Prime Minister Paul Keating regards Abbott as an “intellectual nobody” who lacks any policy ambition. [19]

Finally, we leave you with one last comment made by the former Prime Minister reminding us all that Abbott’s rise to power won’t just be a ‘head-ache’ for Muslims…but for everyone:

“If Tony Abbott ends up the prime minister of Australia, you’ve got to say, God help us.” [20]