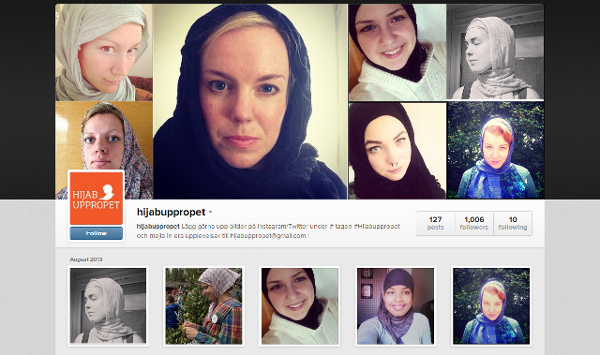 Earlier this month, a heavily pregnant Muslim woman was attacked in a Stockholm suburb apparently for wearing a veil. The assailant shouted racist insults, tore off the woman’s hijab and hit her head against the car.

The attack is reminiscent of one perpetrated in the Paris suburb of Argenteuil in June, in which two “skinheads” allegedly ripped the hijab off a Muslim woman’s head, tore part of her clothing, and kicked her in the hip before fleeing. The woman, who was also pregnant, consequently suffered a miscarriage.

While the attacks were similar in the two countries, the responses were far from it.

In response to the Stockholm attack, 2000 Swedish women took to social media, using the hash tag #hijabuppropet (“hijab outcry”) to post pictures of themselves wearing headscarves in solidarity with the victim. The protesters consisted of women of various faiths, and included politicians and celebrities.

In an opinion piece published on Sunday in Swedish newspaper Aftonbladet, the hijabuppropet organizers urged Justice Minister Beatrice Ask to “ensure that Swedish Muslim women are guaranteed the right to personal safety and religious freedom, without being subject to verbal and physical attacks.” They also “demand[ed] that responsible politicians actively draw attention to and fight the structural discrimination that affects Muslim women.”

As a result of the protests, the Justice Minister has agreed to meet with the organizers of the campaign, signaling a hopeful future for Swedish Muslims, who, according to the hijabuppropet organizers, still have to “tie their headscarves extra tight so that it won’t get ripped off.”

The reaction of the French towards the Argenteuil attacks, however, was nowhere as sympathetic as those of the Swedish. French daily newspaper Le Parisien simply noted that “police sources had some concerns over ‘inconsistencies’ in [the victim’s] account.” Regarding another clash between the police and Argenteuil Muslims in early June, which took place after officers attempted to arrest a woman for wearing the full Islamic veil in public, Le Parisien also leapt to the opposing side, reporting that officers “were attacked… insulted and beaten, including punches,” and were “forced to use tear gas to disperse the angry crowd.”

While the Argenteuil attackers’ actions and Le Parisien’s reactions cannot represent France as a whole, the fact that these attitudes are manifested so frequently without sparking outrage shows that the French still have much to learn from.

In 2010, the Sarkozy administration promulgated a law banning the wearing of the burqa or niqab in public. The hijab, however, was not banned. While such French policies are deemed unfavorable or indeed discriminatory towards Muslims, the clashes between the Muslim in the Paris suburbs and the police have only served to increase, rather than mitigate, the tensions between them.

At the same time, while we may not expect reactions to attacks against Muslims in France to be as strong as the Swedish hijabuppropet movement, we can certainly hope that something will be done to relieve tensions between the Muslim and non-Muslim communities in certain areas of France — on Wednesday, a 16-year-old French Muslim girl tried committing suicide after she was attacked by two “European looking” men earlier this month.

I recently relocated to the center of Paris for four months of study abroad, and have not noticed even the slightest semblance of discrimination against women who wear hijabs or chadors on the street, of which there are many — let’s hope, for now, that this positive indifference towards headscarved women in Paris will spread to its outskirts, and eventually the country as a whole.