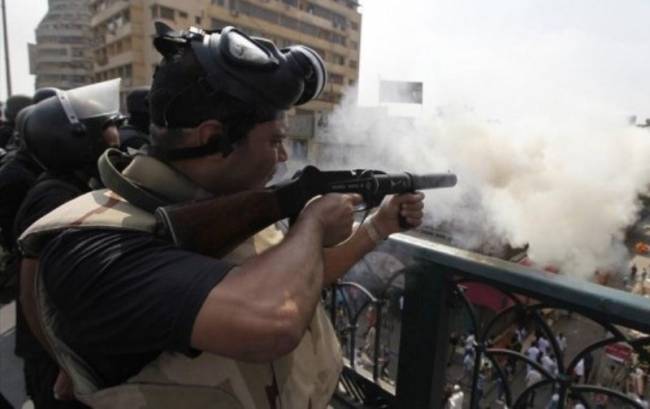 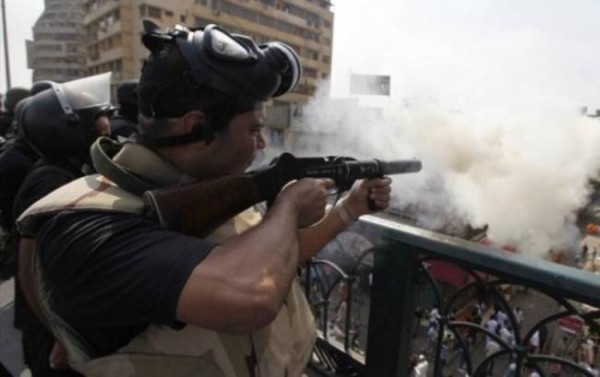 The Orwellian features of the military takeover in Egypt have received attention, although the use of language to evade unwanted truth continues because incentives to do so persist. For this reason, Washington has remained unwilling to call what happened in Egypt on July 3rd as a coup, despite its unmistakable character.

The nature of Egypt’s coup has daily become more and more evident. It is now clear that not only was the takeover properly described as coup, but it has turned out to be a particularly bloody coup that is now being reinforced by a total lockdown of opposition forces and democratic options, including even dissenting opinions.

It is true that the disgraced members of el-Sisi’s façade of civilian leadership, its so-called ‘interim government,’ continue to tell a compliant media in Cairo about intentions to restore democracy, revert to the rule of law, end the state of emergency, and carry forward the spirit of Tahrir Square in 2011. They even have the audacity to invoke their allegiance to the overthrow of Mubarak as ‘our glorious revolution,’ historicizing that memorable occasion when the whole world was inspired by this remarkable scene of Egyptian unity and fearlessness.

They shamelessly make such a claim at the very moment when their own movement is extinguishing the earlier quest for a just society by this newly empowered and ruthless police and security establishment. The latest reports from Egypt suggest an atmosphere in which state terror prevails without accountability and with a writ so large as to reach even those anti-Morsi activists who were in the street on June 30th but now have the temerity to question the release from prison of Mubarak. Nothing more establishes the hypocrisy of the new Egyptian leadership than to insist on their continuity with the earlier democratic movement and their support for Mubarak’s release from prison and accountability.

Of all the Orwellian ironies is this double movement that deserves our contempt: public reassurances about fidelity to the January 25th Revolution of 2011 while arranging the official rehabilitation of Hosni Mubarak!

But less noticed, but at least as insidious, is resurgent Islamophobia on the part of the el-Sisa junta that runs the country with an unconcealed iron fist. Revealingly, Western media seems to avert their eyes when reporting on the suppression of the Muslim Brotherhood, and its supporters. Now according to the most recent reports the non-religious leaders of striking workers or independent journalists are being killed or criminalized if they offer even the mildest criticisms of the harsh oppressiveness that prevails in Egypt these days, and the justifications offered are that they are engaged in ‘Islamic’ politics. [See David D. Kirkpatrick, “Egypt Widens Its Crackdown and Meaning of ‘Islamist,’” New York Times, Aug. 25, 2013] In the security codes operative these days in Egypt, ‘Islamist’ is increasingly being used as a synonym for ‘terrorist,’ and neither is seen as entitled to the protection of law nor even treatment as a human being.

It is hard to grasp this kind of extreme Islamophobia in a country that is itself overwhelmingly Muslim, and in which even its military leadership affirms its private adherence to Islam. Such an inner/outer confusion is more distressing even than the Orwellian manipulations of our feelings by Inversions of language: calling the peaceful demonstrator as ‘a terrorist’ and treating the terrorist acting on behalf of the state as a bastion of public order. Why? This inner/outer demonization of Islamists gives a sanctuary to the virus of genocide. We urgently need further insight into this disturbing discovery that the worst forms of Islamophobia seem currently emergent within the Muslim heartland.

There are other features of Egyptian developments that point in the same direction. None more illuminating than the failure of the Western media to observe that the new rulers of Egypt shockingly turned their back on the most elemental human entitlements of the Muslim Brotherhood, whose membership and sympathies extends to at least 25% of the country. Recall how strident and universally endorsed was the external Western criticism of Morsi for his failure to establish a more inclusive form of democratic governance during his time as president. Then compare with the deafening silence about the undisguised embrace of violent exclusiveness by the el-Sisi cabal. Somehow the repression of Muslims, even if taking the form of massacres, guilt by identity, and group criminalization, is reported upon critically as an overreaching by the government seeking in difficult circumstances to establish public order.

The repressive policies and practices of the el-Sisi leadership are rarely identified, even tentatively, as a genocidal undertaking where affiliations with the most popular and democratically most legitimate political organization in the country is by fiat of the state declared an outlaw organization whose membership become fair game. Is inclusiveness only expected when the government is in the hands of an elected Muslim-oriented leadership? Is exclusiveness overlooked when the government moves against an alleged Islamist movement? What, we might ask, is the el-Sisi concept of inclusiveness? At present, the only plausible answer is ‘my way or the highway.’