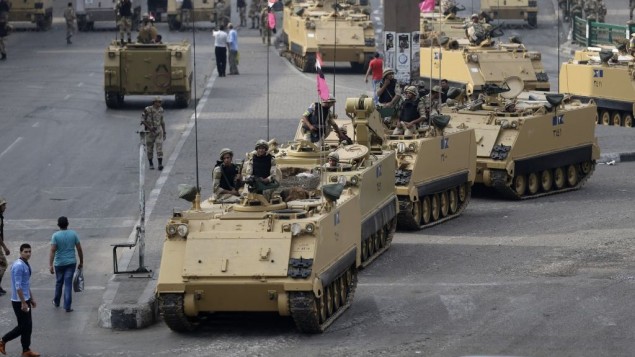 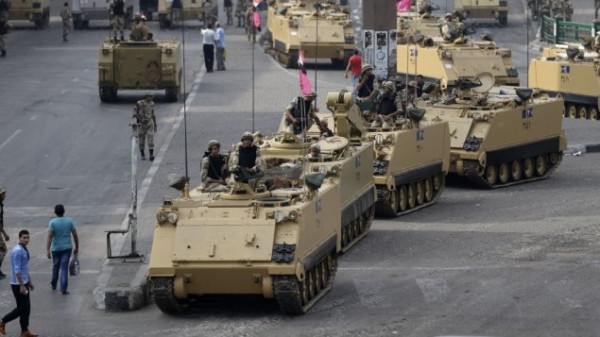 The Israeli government intends to step up this week a campaign urging the United States and the European Union to back the interim military government in Egypt, despite the regime’s rise to power through violence and its ongoing crackdown on the Muslim Brotherhood, The New York Times reported late Sunday.

The report cited a senior Israeli official who, speaking on condition of anonymity, denied claims made in an earlier New York Times report that Israel’s involvement was “undercutting” Western diplomatic efforts in Cairo. The Israeli official said that, for now, the choice in Egypt was “army or anarchy.”

“We’re trying to talk to key actors, key countries, and share our view that you may not like what you see, but what’s the alternative?” the official was quoted as saying. “If you insist on big principles, then you will miss the essential — the essential being putting Egypt back on track at whatever cost. First, save what you can, and then deal with democracy and freedom and so on.”

Abdel-Fattah el-Sissi, the general who orchestrated the military takeover that ousted president Mohammed Morsi and replaced him with an interim government led by Hazem el-Beblawi, was said to have cultivated close ties with Israel during his tenure as head of military intelligence in Egypt.

The 58-year-old general and his close circle, the report said, have kept in close contact with Israel even as fighting erupted on the streets of Cairo, killing 173 over the weekend and, all told, over 800 people since Wednesday’s dismantling of two encampments of Morsi supporters in Cairo — an act that sparked fierce clashes.

The Israeli official who spoke to The New York Times said that Israeli ambassadors would work to convince foreign ministers across Europe that the military-backed government in Cairo was the only way to prevent Egypt from falling even deeper into chaos.

US officials have been grappling with the question of what magnitude of violence would warrant cutting aid to Egypt. And while Israeli decision makers largely believe Washington should back el-Sissi, some experts expressed concern that openly backing the military in the midst of daily blatant violations of Egyptians’ human rights could damage Israel’s credentials as a democracy.

“Israel does not have to support the (Egyptian) regime, especially not publicly. It is not our place to defend all the measures taken, this is not our business,” said Giora Eiland, a former chairman of Israel’s National Security Council.

At the same time, Eiland suggested that international condemnations of the Egyptian military’s actions have been excessive. He said Israeli and Western interests are “much closer” to the interests of el-Sissi and his secular allies.

“Even if we don’t share the same values, we can share the same interests,” he said. “The Israeli interest is quite clear. We want a stable regime in Egypt.”

“At the end of the day, the US has to realize the real potential reliable partner is the combination of the coalition of secular people in Egypt and the current military regime,” he added.

Dr. Mordechai Kedar, of the Begin-Sadat Center for Strategic Studies, was quoted by the Times as saying that Israel should have been much more discreet in its support of el-Sissi. “By supporting explicitly the army, (Israel) exposes itself to retaliation,” he said.

But two former Israeli ambassadors to Egypt, Eli Shaked and Yitzhak Levanon, disagreed, and said that Israel had handled the situation in Egypt extremely well.

Levanon said that rather than “pushing” governments to act one way or another, Israel has been “expressing what we believe is best for the region.”

Shaked claimed that Israel had “acted very discreetly” and said that Jerusalem “did not have any illusions about the possibility of a democracy in Egypt,” a mistake he said was made by both the US and the EU.

“I understand Washington and Europe with their criticism, but there is no alternative to letting the army in Egypt try by force,” he explained, adding that it wasn’t about picking between “good guys and bad guys,” but rather of deciding “who is less harmful.”

The US and European Union have criticized Egypt’s crackdown on Morsi’s supporters.

President Barack Obama has suspended a planned military exercise with Egypt, and Sen. John McCain has led a chorus of voices urging a halt in the $1.3 billion in military aid the US sends to Egypt each year.

“For us to sit by and watch this happen is a violation of everything that we stood for,” the Republican senator told CNN. “We’re not sticking with our values.”

Obama has not made a decision. But suggestions like McCain’s have raised concerns in Israel that tough US action could shake the alliance with Egypt — and even prompt Egypt to retaliate against Israel.

“The Israeli and Egyptian security establishments are operating inside a bubble and, for the time being, there are no signs that relations between them have cooled,” wrote Alex Fishman, a military affairs commentator for the Yedioth Ahronoth daily. “But the Egyptian street is beginning to press, and the current regime is going to have to toss it a bone. Regrettably, it is going to be an Israeli bone it tosses.”

Israeli officials say the peace accord remains intact, and dismiss speculation that it could be threatened.

Shaked, the former Israeli ambassador in Egypt, told AP the scenario of the Camp David accords unraveling was highly unlikely. He said it was highly doubtful the United States would cut off aid to Egypt and even if it did, he could not envision Egypt canceling the peace treaty.

“They have no interest in engaging in another conflict they have neither the time nor the energy for,” he said. “They need us now, with or without American aid.”