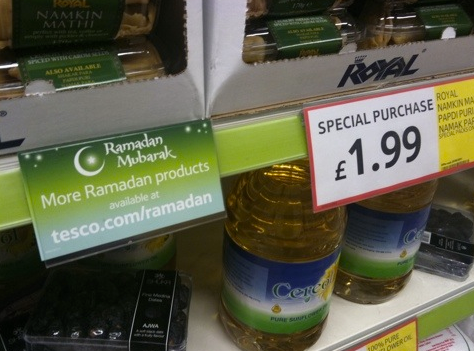 LONDON: UK supermarkets are going the extra mile in their quest for Muslim custom. Well-advertised Ramadan sales with stock for many tastes in iftars are some of the means employed to make connections with the faithful. But there is still work to do.

In a north London supermarket, late in the evening in Ramadan, Shazia Wahid and her husband are shopping for food.

The shelves of the long Ramadan aisle are stacked with a mix of cooking basics and luxuries that reflect the diverse tastes of Britain’s Muslim population.

Ms Wahid, a food-technology teacher at a secondary school, says she was immediately attracted.

“The first Ramadan promotion I saw this year was at my local Tesco where they have an aisle specifically arranged with food aimed at Ramadan and mostly the Asian community,” she says.

Tesco is the UK’s largest retailer, with more than 6,000 stores, of which 315 carry the Ramadan promotion. Its strategy for the holy month is clearly working, with an estimated sales increase of £30 million.

Along with the in-store marketing material, Tesco has run advertisements on smaller community television channels aimed at the UK’s Muslim population.

“The way the aisle was arranged did draw my attention to it,” says Ms Wahid. “I did pick up items that are usually in my shopping basket such as basmati rice, wheat flour and lentils that were on offer.”

She is not alone. Other Muslim families stop to load their trolleys with bulk buys, as well as traditional iftar foods such as Bombay mix, pakoras and dates.

Ms Wahid is part of a growing Muslim consumer segment targeted by British supermarkets. Strategies such as the Ramadan promotion provide part of that pull.

“It’s definitely convenient to visit a superstore where you can pick up everything from halal meat to the traditional Asian staple items you need. It did make me feel encouraged to shop there.”

The UK is home to 2.8 million Muslims, almost 5 per cent of the population. While their average demographic is rising, Muslims are young, with almost half of them under 25.

In-store promotions and community TV advertising may appeal to the broad base of Muslim shoppers, but Tesco knows it is this younger tech-savvy segment that it needs to target.

Its approach is to ask Muslim customers and colleagues “to let us know on social media how they will be breaking their fast, and what delicious family recipes from around the world they will be planning and cooking”, says Musadiq Jivraj, a buyer at Tesco World Foods.

The young Muslim consumer segment is also increasingly educated and brand loyal. Their household size is larger than average, and their consumption of certain food groups, such as meat, is also high.

These are some of the characteristics that make it a particularly attractive consumer group. The potential of this segment is only slowly coming to the attention of businesses.

Asda is the best-known of the supermarkets in its efforts to reach Muslim shoppers. It has halal meat counters in stores that are in areas with big Muslim populations. Counters are staffed by Muslims to build trust. Helen Yates, customer planning manager for ethnic foods at Asda, says: “Second and third-generation Muslim customers want a one-stop shop and the convenience of getting everything under one roof.

“In 2014 and beyond we plan to look at the calendar to see how we can further help the Muslim community celebrate more festivals and events by firstly recognizing them in store with signage, and secondly putting promotions on the right products.”

All of the supermarkets are keen to emphasize that they are working hard to meet the needs of their customers.

At Morrison’s, planning begins six to eight months in advance of Ramadan and the range is carried in 100 stores.

“Our aspiration is to meet the needs of customers during an important period for them. We want to excite them,” says Noor Ali, lead world foods buyer.

Ramadan is incorporated into the corporate calendar and the spirit is very positive among staff and suppliers, Ms Ali says.

The aim is to increase the number of customers and the amount much they spend in each visit.

To encourage shoppers, Morrison’s has delivered a four-page leaflet to half a million households around relevant stores, and has run press ads, online advertising and radio spots on community stations.

Price, convenience and the right range of products are at the top of Ms Ali’s mind.

“It’s about doing the right thing by our communities and we have the right ranges,” she says. She says shopping habits change among Muslims in the holy month.

“They’re shopping in the evening, so we make sure our shelves are ready stacked.” The promotion also appeals to non-Muslims “because it’s a great offer”.

Notable in Morrison’s Ramadan strategy is a tie-in with the National Zakat Foundation charity. For every item sold from within the 40-product Ramadan range, 10 pence will be donated to NZF.

It was the NZF’s focus on local projects and alleviating poverty in the UK that attracted Morrison’s to the partnership.

While Muslim shoppers may be pleased to see themselves recognized, they feel there is still a long way to go.

“The supermarkets need to carry out more research as to what type of food products are most suitable to be eaten during Ramadan, instead of having preconceived notions that we only eat fried samosas for iftar,” says Ms Wahid.

As a food-technology teacher, she is particularly concerned with the health effects of the “deep-fried, salty snacks, as well as drinks full of sugar” she sees on the shelves.

Ramadan strategies make commercial sense for supermarkets, but it is obvious they are keenly aware of the sensitive political backdrop about any subject related to Muslims.

Tesco says boldly that, “in some of our stores, Ramadan will be a bigger event than Christmas”.

But it is clear there is no favoritism as this is “one of over 200 festivals that we mark across our UK stores, including Easter, Passover and Diwali”.

Some efforts to cater for Muslims has generated far-right backlash and the supermarket promotions are no exception. Anti-Muslim websites have been quick to accuse them with intense vitriol of bending to the Muslim will.