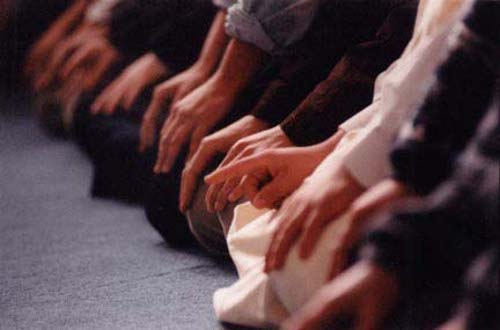 Ramadan is a month of tremendous blessings. Today it is also a time of great challenges. The challenges come from a head-on collision between Ramadan and the materialism, consumerism, and hedonism that have unfortunately engulfed Muslim societies. Approached correctly and observed diligently, the former could help us overcome the latter. In our present state of decay, the opposite seems to be happening in many cases.

Ramadan’s month long intensive training program begins to teach self-discipline by rearranging our daily life. It changes the time we go to bed, the time we get up, the times we eat. We learn to do without the permissible joys of this life for the long prescribed hours of the day. After a day of fasting, we break the fast only to rush to the maghrib salat, which cannot be delayed beyond a few minutes. An hour or two later we are ready for the special nightly prayer, a unique prayer which can only be performed during Ramadan and which both highlights and cements our special relationship with the Qur’an. We stand and listen to the entire Qur’an being recited from heart in the taraweeh prayer. This is in addition to our own reading of the Qur’an that aims at finishing at least one cycle of the complete reading during the month on our own. With all the extra acts of worship, there is hardly any time left for anything beyond the essential during the day and night. This is special time, when the rewards for voluntary acts of worship equal the rewards of mandatory acts and the rewards for the latter are multiplied up to 700 times. With the scales of rewards so extraordinarily high during this month, it would be folly to waste our time on things that can be done during ordinary time — throughout the rest of the year. The opportunity cost is just unbelievably high to do otherwise.

Yet that is precisely what we manage to do in so many cases.

Consider iftar, the breaking of the fast at the end of the day. A Jewish acquaintance once told me about his fast of Yum Kippur. Unlike the Islamic fasts, all Jewish fasts are a one day affair but the day is longer. It starts twenty minutes before sundown on the previous night. At the end of the fast, he said, “I went to a restaurant and ate like a pig.” With the maghrib salat and the taraweeh, the Ramadan fast does not permit that. Neither does the spirit of Ramadan permit indulgence. Yet today one can see fancy restaurants in the Muslim world offering high priced iftar dinner specials that invite you to do just that. An ad from a five star hotel in Karachi sums up the spirit of this venture: “This exquisite setting at our extravagant Marquee is the perfect venue for a genuinely fascinating and lavish buffet iftar dinner, featuring restaurant specialties and culinary delights created especially for the Holy month.” One could substitute Dubai or Jeddah or Kuala Lumpur or any other Muslim city for Karachi; the message will remain the same. Instead of turning your attention to Allah, turn it to the exquisite setting and culinary delights. Indulge. Turn the breaking of the fast into a status symbol. Exquisite (i.e. esoteric), extravagant, lavish. This is how the agents of rampant consumerism counter Ramadan’s message of simplicity, sacrifice, and self discipline. All while advertising their special regard for the holy month.

To be sure, the fraction of Muslims going to these fancy restaurants is small, although it is increasing. But their influence on the society goes beyond these numbers. For they set the norms and expectations for the larger society. Lavish iftar parties for which people drive long distances and miss their prayers are an indication of these influences.

In the US, the Muslim population has not reached the levels where such iftar extravaganza would be offered by the Hiltons and Marriotts here. But the underlying malaise is there, although it has different manifestations. Here, of necessity, mosques and Islamic centers also work as community centers so the problems that one sees in the bazaars and other institutions outside the mosque in Muslim countries are witnessed in the mosque here. At the larger Islamic centers, bazaars, games and gossip sessions go on during Ramadan nights — festive social gatherings and other activities that work not to reinforce but counter the purpose and spirit of Ramadan.

This, along with the pressures of the pop culture, is posing unprecedented dangers to the very nature of the forms of worship.

Consider taraweeh, the special long nightly prayer that is a hallmark of Ramadan. Throughout the Muslim world Muslims stand up in these prayers to listen to the recitation of the Qur’an, leading to khatam or completion of a complete cycle of reading during the month. Everyone, young and old alike, cherishes the opportunity to take part in this very special act of worship. There is a small difference between juristic schools regarding the details of taraweeh. A majority offers twenty rakats to finish the day’s portion of Qur’anic reading. A smaller group finishes the task in eight rakats. But both groups perform the khatam.

But not in the US. To be sure, here most mosques still perform the twenty rakats and perform the khatam. But there is a big difference. Here one can see the congregation shrinking considerably after the eight rakats. That is when a large number, including most of the youth, leave. As a result, for all practical purposes we can discern an emerging generational gap in the forms of taraweeh.The twenty rakats with the complete khatam are for the ‘uncles’. For the youth, regardless of the fiqhi school they belong to, it is just eight rakats.

We can discern an emerging generational gap in the forms of taraweeh. The twenty rakats with the complete khatam are for the ‘uncles’. For the youth, regardless of the fiqhi school they belong to, it is just eight rakats.

The situation is so bad that at many places officially the “youth taraweeh” (if there is any such thing in the Shariah) ends after eight rakats and the mosque administration plans other youth activities like lectures and even games at that time, even though the taraweeh continues. Having another official activity going on in the mosque at the time of congregational prayer should be unthinkable for it belittles the congregational prayer. You drop all business to attend the congregational prayer, especially when you are inside the mosque. Yet this slighting of the important act of worship of Ramadan goes on without much concern during Ramadan nights.

The act is justified on the grounds of the fiqhi difference in the number of rakats of taraweeh. But there is a big difference between offering eight rakats because one is convinced that the proper number of rakats is eight and doing so because this makes for a shorter prayer time and is less tiring. For the former is actually more tiring as you stand up for longer periods for the same portion of the Qur’anic recitation as would be divided into twenty rakats. Choosing eight at a place where they offer twenty means you will be listening to about forty percent of the Qur’anic recitation. And if we are happy— even adamant— about this choice, what does that say about our love for and relationship with the Qur’an?

The practice could be excused if a person were too old, too weak, or too tired after a long day’s work. But we are talking about young healthy people who would spend the rest of the time gossiping or other youthful activities even as the prayer goes on. Should this disregard be allowed to hide behind a technical legal cover?

There are other variations of this distortion in taraweeh that cut across age groups. At some places people sit and listen to the Qur’anic recitation before the taraweeh so as to reduce the amount that would be recited in taraweeh. At other places some people just sit back and listen to the recitation without joining the prayer. With these trends, one wonders whether, if unchecked, this very important part of Ramadan will be distorted beyond recognition in a generation or so.

The same observations can be made about Qiyam-ul-Lail. Ramadan nights, especially during the last third of the month, are meant to be spent in personal acts of worship, in salat, dhikr, duas, reading the Qur’an and seeking forgiveness. Instead these are spent in talks, socialization, and bazaars set up on the mosque compounds.

The most solemn and demanding act of worship for Ramadan is the I’tikaaf, when a person secludes himself from the world around in a corner of the mosque to devote himself totally to remembering Allah and strengthening his personal relationship with Him. The act could provide spiritual rebirth and carries tremendous rewards. Yet today one can see laptops, cell phones, iPads, and other modern widgets routinely forming a part of the equipment of itikaf. It is an open question how can anyone realize the goals of itikaf with activities like watching videos, Internet surfing, texting, and chatting.

While telling us about the great blessings of Ramadan, the Messenger, Sall-Allahu alayhi wa sallam, also warned about the possibility that it could cement our loss and wretchedness if we are not serious about taking advantage from its blessings. In one famous hadith he said that there are those who get nothing from their fasts but hunger and thirst and nothing from their qiyam-ul-lail but sleep deprivation. In another hadith he said ameen as angel Jibrael cursed the person who finds Ramadan in a state of health and yet does not use it to win freedom from the Fire through acts of devotion and worship. There can be no sterner warnings than these. We have been forewarned to be forearmed. If we pay attention to them and become serious about Ramadan, then it would be a month of tremendous blessings.

This requires fasting with our whole body and soul. Our eyes, ears, tongues, and hearts should be totally committed to the fast by not seeing, hearing, or speaking haram things or thinking haram ideas. Honesty, truthfulness and Allah consciousness or taqwa should be our guiding values. We should avoid all frivolities, including the ones that are committed in the name of religion. Only then we will realize the sweetness in the acts of worship like prayers and recitation and utter foolishness of exchanging them for entertainment.

This will turn Ramadan into a month of spiritual renewal that would recharge our batteries of iman and taqwa and prepare us to face the world and its temptations with moral uprightness for another year.

Otherwise the blessings would have been hijacked from us.