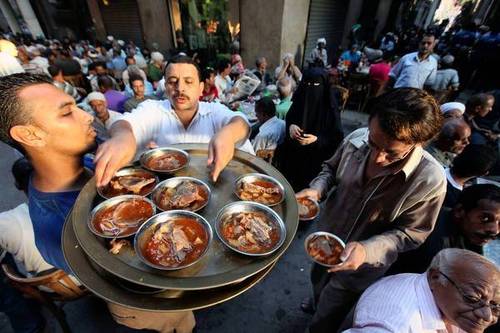 Have you ever noticed that in Ramadaan how it is that everyone’s days (and nights) seem to rotate around their salaah(prayer) times and how easy it is to fast for long periods, perform Salaah, recite the Quraan, spend more time in the Masjid and to do good ? Business appointments are deliberately avoided close to salaah times and trips to shopping malls are strictly to get what’s required, recreation curtailed and ‘entertainment’, almost nonexistent. Journeys, if necessary, are planned in such a manner that destinations are reached before the time of futoor (opening of the fast). In summation we can safely say that life is taken very seriously and time scrupulously spent.

‘If our lives are spent as we spend Ramadaan then death (our meeting with Allah Jalla Wa A’ala) will be enjoyable to us as the joy we feel at the sighting of the crescent of Eidul Fitr’.

One of the most salient aspects of the Shariah (The Body of Islamic Law) is that almost all the formal acts of Ibaadah (Worship) have been fixed. It can be safely said that the temperament of Ibaadah in Islam is very ‘time and place’ specific.

The maximum benefit of these acts of Ibaadah will be reaped when they are done at their specific times and places. An example to emphasise the point is that most Muslims are aware of the great virtue of the day of Arafah (9th Zil Hijjah) during Hajj (pilgrimage). It is a day wherein Allah frees the most souls from Jahannum (Hell) and displays His Mercy and Forgiveness in waves and torrents like no other time. Arafah is essentially a desert plain with little or no vegetation. If a person were to be on the plains of Arafah on every other day of the year other than the 9th of Zhul Hijjah he will not benefit from the great rewards of Arafah. An example pertaining to Ramadaan is that if a person, with a valid reason, misses the fast of Ramadaan he cannot acquire the spiritual benefit of that one fast were he to fast for the entire year out of Ramadaan. The Qadha fast (late fulfillment) will fulfill his obligation but detract from the benefit of that fast in its original place and time.

While there will be those who argue that the Shariah is not so stringent and allows for leeway there is great wisdom in fixing the formal acts of Ibaadah (Worship). Breaking away from a high profile meeting or stopping in the middle of an important task at work and heading off for Salaah to the local Masjid for the congregational prayer may not seem very different to fulfilling the obligation of Salaah after the meeting or completing one’s task but upon closer scrutiny under a ‘spiritual’ microscope one will find an important difference. In the first instance a person has put the command of the Creator – Allah Jalla Wa A’ala – before everything else while in the second instance, while not making a verbal statement, a person has given priority to his meeting or task over the fulfilling of the command of Allah Jalla Wa A’ala. The former is precisely the aim and objective of Shariah. After all we are the ‘Ibaad – Slaves’ of Allah Jalla Wa A’ala and as Hasan Basri (May Allah have mercy on him) says ‘a slave can have no other wish than to fulfill the wish (command) of his/her Master’. Fulfilling the command of Allah Jalla Wa A’ala is another name for ‘Worship’ which is the objective of the short and transitory life of a Human Being (Qur’an Surah 51, Verse 56) on this earth and determines the extent of his/her success or failure in the Akhira (the Hereafter)

From this perspective then, Ramadaan is a practical exercise and lesson in learning Uboodiya (Slavery) to one’s Creator where one’s 24 hour day becomes consciously focused at fulfilling the Command of one’s Creator over and above all the ‘commands’ of a personal or vocational nature. Ramadaan is also proof to us that we do have the ability and capacity to dedicate ourselves towards a life of conscious worship of Allah Jalla Wa A’ala and not just one month of the year. One drawback is that we limit our niyyah (intention) only for Ramadaan.

As mentioned at the beginning, we find that in Ramadaan it becomes easy to good deeds. This is the coming in to play of the powerful force that is collectivity in thought and action as well as the effect of an environment. Islam recognises the powerful force of social pressure towards conformance and adherence.

This is borne out by the famous saying of the Noble Messenger of Allah (peace be upon him) narrated by Abu Sa`id Al-Khudri (May Allah be pleased with him) about a man from the previous nations who killed ninety nine people and then desired forgiveness. It is a lengthy narration but the crux of the matter was that he was forgiven, because the advice given to him by a scholar to maintain his state of Taubah (repentance) was, ‘Go to such and such land; there (you will find) people devoted to prayer and worship of Allah, join them in worship, and do not come back to your land because it is an evil place’ (Hadith-Bukhari & Muslim)

This movement towards the environment of righteousness was the deciding factor that secured his forgiveness. This highlights the great effect that company and/or environment can have on influencing the actions of individuals and in turn communities and societies. This is also corroborated by another saying of the Messenger of Allah (peace be upon him) narrated by Abu Musa Al Ash’ari (May Allah be pleased with him) wherein the similitude of good and bad company (environments) is likened to a person spending time in the company of a perfume seller and a blacksmith. The least one will benefit from the former is a pleasant scent (without buying) while the latter will cause one to obtain an unpleasant and foul smell and may even burn one’s clothing. (Hadith-Bukhari & Muslim)

Upon closer perusal we will find that the formal acts of worship in Islam while, being ‘time and place’ specific, are also very social and communal with an emphasis on collectivity and public benefit. This can be seen in the institution of Salaah, Haj, Zakaat as well as in Ramadaan.

Therefore in Ramadaan we find it easy to do more good because everyone is in the same frame of mind, understanding the magnitude that is the month of Ramadaan, as well as consciously making an effort practically to maximise this great opportunity to earn good. This in turn creates an environment that generates energy and buzz that is an impetus for all acts of Ibaadah (Worship) even for those of us who normally feel lazy and disinclined.

Ramadaan presents an excellent opportunity for positive individual and collective change. The first step towards achieving this would be, not to limit our niyyah only to Ramadaan but to make the niyyah that Ramadaan be the beginning of change for us. Once we do so the next step would be to attach ourselves after Ramadaan to such people and environments where such A’amaal (practices) are in vogue that would enhance and maintain all that we had reaped in Ramadaan. If we spend one Ramadaan to the next Ramadaan for the balance of our lives in this manner then have no doubt that the time of meeting with Allah Jalla Wa A’ala (death) will be enjoyable to us as the joy we feel at the sighting of the crescent of Eidul Fitr…if not more!!!

And the one who achieves this has fulfilled the purpose of creation and passed the test that is called ‘LIFE’ and is entitled to an eternal and everlasting life of bliss and happiness.