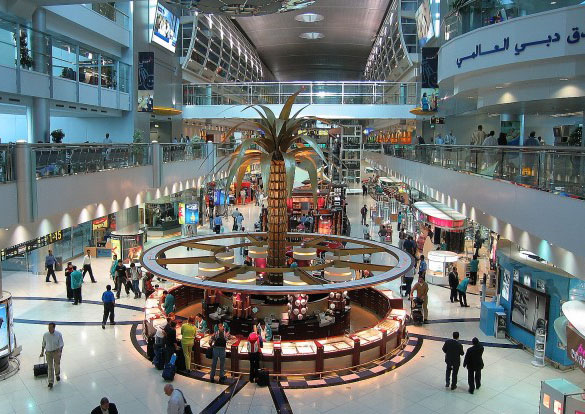 This pocket-sized flyer is being handed out by security guards to visitors who are dressed inappropriately in a bid to step up awareness of the mall’s courtesy policy.

Guards told the Dubai-based news organisation 7DAYS that although the information has been available for a long time, it is only in the past month they have been instructed to politely distribute the leaflets to violators. “If we see someone who is not following the policy, it is part of our job to inform them by giving them the card,” one of the guards explained.

The text on the card states: “Please wear respectful clothing. For example, shoulders and knees should be covered. No kissing or overt display of affection in the mall.

“No smoking in the mall. No dangerous activities. For example sports games, rollerblading or skateboarding.

“No pets are allowed in the mall.”

The guards say they have been greeted with mixed reactions when handing out cards.

One worker explained: “Some get angry, some get upset, and some just refuse to take the flyer when we hand it to them and walk off. They say they don’t want it.”

Another guard, who said he distributes between 10 and 30 cards a day, added: “Some of the ladies are very nice. They say thank you and some even see it and seem surprised, and then say sorry. I think most of the ones who do that are tourists though.”

But many others are not as kind, said his co-worker. “Sometimes they get very angry.

One lady, who was wearing a very short dress and holding hands with her male companion, got very upset and said ‘how dare you say anything to me’,” the guard explained.

In such cases, the guards said they make sure to remain extremely polite and apologize while explaining that it’s simply the mall’s policy. “We are not afraid, it’s the policy and it’s our job to tell them about it. But they are also guests so we have to smile and be polite,” he said.

Tourist Sana Aurora, who was handed the flyer while she was shopping with her husband, told 7DAYS: “I cannot believe they would do this. I’m so upset. It’s really hot here and just because I’m wearing an off-shoulder top does not mean I am indecently dressed. It’s insulting that they would suggest that.”

The visitor, from Boston in the US, added that she saw far more scantily dressed women around her. “Why didn’t he approach all the others too? I didn’t see the guards stop the women in tiny shorts and midriff-baring T-shirts who walked past when he was handing the card to me.”

But Aurora’s husband added: “I thought it was hilarious, to be honest – a bit like a referee card for fashion.

I even took a photo and immediately posted it on Facebook to show our friends in Bos­ton. I wanted to keep it as a souvenir but then Sana would be mad.”

Yet it’s not just visitors who run into trouble. The security men said staff at some of the shops at the mall surprise them the most.“One time I gave a card to the same lady, dressed in a very low cut top and very short skirt, two days in a row. Then I realized that she actually worked at one of the shops here,” one worker said.

7DAYS asked shoppers at the mall what they thought of the cards. One woman, wearing a low-cut summer dress, said how she dressed was nob­ody’s business. “I’m wearing what they’re selling at the shops here. I will dress as I please,” she said.

However, another expat said she was shocked that people weren’t respecting local customs. Brit Hayley Cox said: “Women here dress in a way that we wouldn’t even back home in the UK. So I don’t see the problem with educating them. It’s sad that they have to be told, because it should be obvious as they’re living in an Islamic country. Why can’t people just show some respect?”

A Dubai Mall spokesperson told 7DAYS: “The Dubai Mall underlines its commitment to the values and customs of the UAE, and urges all visitors to adhere to its dress code policy.

Most of our visitors are aware of the dress code policy. But given that the city hosts visitors from around the world – some of them not aware of the cultural sensitivities of the country – we take extra care in highlighting the mall’s courtesy policy for the benefit of all. For more awareness, the courtesy policy is printed in two types of flyers in eight languages.

“Our guest service representatives and security staff have been instructed to hand out the flyers discreetly and courteously, to remind any guests about the need to respect the region’s cultural ethos. We are committed to ensuring the social and cultural morals of the UAE and encourage visitors to respect the country’s cultural sensitivities.”