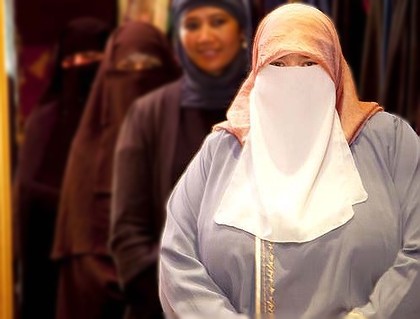 DO you miss things, now that youre Muslim? asked the journalist.

I struggled to supply an answer. I was raised in a teetotaller family and it seemed shallow to mention crispy pan-fried bacon.

Still, surely I ought to miss something.

“Well, if there are men around, I can’t put my togs on and go for a swim at the beach,” I offered, a stereotypically Aussie reply.

When John, my mildly water-phobic (because he’s Irish) husband, read the finished piece – an interview with three Muslim women converts – he laughed.

“This makes you sound like a surfer babe,” he said and unkindly pointed out I’d hardly spent my time pining for the surf; the closest I’d been to a beach for years was walking past bags of sand mix at Bunnings.

Even before converting, I’d sooner have jumped in the water fully clothed than bare my generously proportioned figure and pasty limbs to the disapproving glances of toned, tanned beachgoers.

Thank goodness we now have the burqini, good for Islamic modesty and full-body UV protection.

But strangers suppose I must be some sort of hair-shirt martyr to take up a religion that bans Nativity plays in kindergartens and ham sandwiches in council offices.

“Why Islam?” they enquire, as if asking, “What attracts you to daily coffee enemas?” That I didn’t convert for my fella – an ex-Catholic, lapsed Baha’i of indeterminate spirituality – confuses them even more.

I was raised in a Baha’i family myself, unusual enough for a white, middle-class Aussie family in the ’70s and ’80s.

My parents converted and met through the small, newish religion that began as a 19th-century Iranian offshoot of Islam before it branched out with its own logo and business stationery.

Being typical Westerners, we hardly knew anything about the parent religion from which it sprang.

Thus, I discovered Islam on my own, in the halcyon days before September 11, when the only Islam title stocked in high-street bookstores was a translation of the Koran shelved in the New Age section next to the Dalai Lama’s latest offering and books on tarot cards and astrology.

I learned of Islam’s beauty before it became forever associated with the Twin Towers falling to their devastating conclusion.

I bought my first Koran after chancing upon it in the Theosophical Society’s bookshop. It was a large, heavy, green and faux-gold-covered edition; its mysterious Arabic script explained for non-natives via an English translation and extensive footnotes.

This one is still my favourite Koran, even though my shelves are now stuffed full of other translations and editions.

Inhaling the faint wisp of incense infused into its pages instantly brings me back to first encountering God’s promise: “When my servants ask thee concerning me, I am indeed close [to them]: I listen to the prayer of every suppliant when he calleth on me: Let them also, with a will, listen to my call, and believe in me: That they may walk in the right way” (2:186).

I had disconcerting experiences coming to Islam, too. There was meeting Sister Aishah*, who conducted Islamic education classes teaching everything from intricate burial rules to scriptural exegesis.

Lolling about a Brunswick tram stop one afternoon, I noticed a hand-written leaflet for “Sisters’ Classes” sticky-taped up on the window of a Muslim women’s clothing shop. I rang and asked if I could go. “I’m not going to convert,” I quickly emphasised.

Having adopted Islam in the ’70s after a visit to Egypt, Sister Aishah was rumoured to belong to the women’s wing of the Muslim Brotherhood and with her stern demeanour, she scared the willies out of me.

I sat in on her class with half a dozen other young women and learned how ingrate, truthconcealing, Islam-rejecting unbelievers would go to the hellfire.

Her fundamentalist theological approach was not my cup of tea, but she was the only Muslim I knew teaching converts to actually practise the religion: how to pray, how to fast, how to worry about your non-Muslim relatives bound for the fire.

A more gentle approach came from a mild-mannered university professor. I was finishing a music degree and students could take a foreign language as a supplement.

On a bit of a whim, I rocked up to the administration office asking to do Arabic. “That’s a bit unusual,” noted my adviser.

“Usually we have opera singers wanting Italian, French or German. I don’t think there are any operas in Arabic.”

The paused, as if a Semitic aria might surface to mind, then continued, “But if the language department gives you permission, why not?”

The professor was a serene Maldivian who introduced me to the brilliant civilisations Islam had spawned whilst
Christendom floundered in the Dark Ages.

In getting to know my mostly Muslim classmates, I discovered they had normal lives and normal personalities, although they often came from far-flung places I would have had trouble pinpointing on a map.

Some were religious, some weren’t.

Some wore headgear, most didn’t. It took me a few years of dipping my toe in the water before I finally  surrendered to the call.

In the meantime, I got married and moved overseas, but I just couldn’t shake the sense that I was, underneath it all, a Muslim.

As with many other converts to Islam, I didn’t so much have a single transformative moment, as a gradual awareness that Islam was my spiritual home.

I was terribly excited to start wearing hijab.

Unfortunately, a headscarf on me says ‘babushka’ more than ‘Arabian beauty’, but at least it covers bad-hair days well.

Like regional accents, if you hang around Muslims long enough, you can tell a woman’s ethnic background by the colour and tying of her hijab.

Young Turkish women have a thing for heavily patterned silk scarves tightly wrapped around their heads, Malays do pastels neatly pinned under the chin, and women from the Gulf clip flower claws in their hair under their scarves for more volume.

Converts mix andmatch styles, and YouTube hijab-tying tutorials have become quite the thing! Converting isn’t like wearing a daring shade of mustard or signing up for a store loyalty card – it evokes deep emotions in the people around you.

Parents wonder what happened, friends wonder if you’ll stop being fun, employers wonder if they’ll have to accommodate strange practices to avoid being sued for discrimination.

To his credit, John, my amiable and ever-accommodating mate, took it all in his stride.

He’d never been one for eating ham sandwiches or pork chops, and so didn’t miss their absence from our fridge.

Happily, our marriage continued as it had been, and when our daughter was born, we decided to introduce her to both Muslim and Baha’i cultures.

When she’s old enough, she’ll be responsible for putting whatever she likes in the census question on religion. She’s been to Baha’i children’s classes and Islamic weekend school. To be frank, her favourite part of being an interfaith child is increased opportunities for gift-receiving.

My family and friends were surprised when I came out of the Islamic closet, as I’d kept mum about my desire to convert.

At least I think they were surprised; it’s not the kind of thing you easily drop into conversation: “Haven’t strawberries become expensive, and by the way, I think I’ll change religions.”

The most unsettling reaction came from an old friend of my parents, a highly respected elder of the community. I was attending a Baha’i meeting with John, and towards the end of the evening, Mr Aristu* pulled me aside to ask why I had converted.

“You know,” he said, leaning in close, “in Iran, if it were the other way around, you’d be killed.” He seemed to enjoy startling me. I went home in tears.

I guess even peaceable Baha’is don’t deal well with apostates.

The Koran says: “Do people imagine that they will be left to say, ‘We have faith’ and will not be tested?” (29:2). For converts like myself, the negative reactions of others is perhaps the most difficult thing.

Although I was fortunate with having supportive family and friends, the only way I could cope with the seeming relentless negativity from some politicians and sections of the media in the aftermath of September 11 was to throw myself wholeheartedly into projects promoting positive interfaith relations and education.

I wanted my fellow Aussies to see the side of Islam and Muslims that I knew and loved.

I got involved in mosque open days; gave talks to schools, churches, synagogues and anyone else who asked; wrote articles on Islam and Muslims for newspapers; taught seminars for young Muslims; and became the playgroup leader at my local Islamic weekend school.

I hope it helps others as much as it’s helped me.

Do I have regrets in my life? Yes, but converting to Islam is not one of them.

*names have been changed