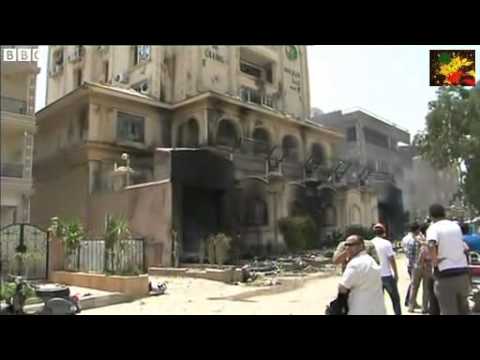 The Egyptian military is giving President Mohamed Morsi and opposition leaders 48 hours to settle their differences and agree on a path forward. If they don’t, according to the military, it will issue its own plan for Egypt’s future.

The ultimatum was delivered Monday by Defense Minister General Abdel Fattah al-Sisi after several days of massive nationwide protests and violence that has left at least 16 people dead.

Witnesses said the protesters smashed windows and tossed firebombs into the Brotherhood building. Amateur video showed Brotherhood supporters on the roof of the building firing at protesters below. Officials said at least five people were killed.

Brotherhood spokesman Gehad el Haddad accused Egypt’s national police force of not responding to pleas to intervene when the group’s headquarters building came under attack. Haddad also warned that the Brotherhood would consider setting up an armed militia to defend its party offices.

The military’s ultimatum also came after anti-government demonstrations throughout Egypt on Sunday that were the largest since the 2011 revolution that swept former president Hosni Mubarak from power.  Arabic-language media quoted the Interior Ministry saying the crowds in Cairo and other cities across Egypt totaled as many as 3 million people.

The demonstrations were organized in part by the recently-formed opposition “Tamarrod” movement, which is demanding that Morsi step down by Tuesday. Morsi told Britain’s Guardian newspaper Sunday that he was legitimately elected and would not resign.

Veteran opposition editor and publisher Hisham Kassem says Morsi is finding himself increasingly isolated as most branches of the government have deserted him.

Kassem also pointed out that the Egyptian national police force, which had been widely discredited for siding with the Mubarak regime against protesters in 2011, has suddenly gained new favor with the public, “by siding with the people, this time around.”

Egyptian police officers chanted slogans against Morsi at the funeral for a top commander killed in an attack in the Sinai, last week. Several officers recently accused the Muslim Brotherhood of colluding with militants in the Sinai.

Edward Yeranian in Cairo also contributed to this report