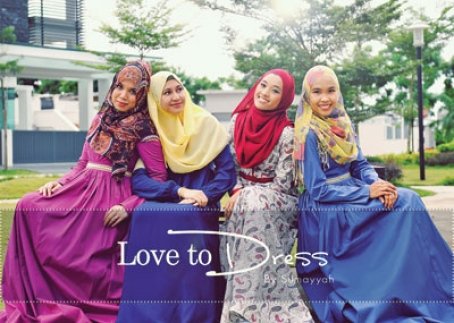 SUMAYYAH Nasaruddin currently lives in Aberdeen, Scotland, where she teaches religious classes on weekends. The 31-year-old flies home to Kuala Lumpur often enough, but this time, she is back to launch her own clothing brand called Love To Dress.

Designed in Scotland, manufactured in China and to be marketed in Malaysia and Australia next month, Love To Dress marks Sumayyah’s official entry into the Muslim fashion market, an emerging industry in which the young designer believes she has found her niche.

A law graduate who worked as a merchant banker, Sumayyah says her journey into the fashion world was unplanned, but hardly surprising either. However, she never expected that out of many genres and styles available, she would end up championing Muslim fashion.

“When I was young, I used to follow my grandmother to shop for clothes in Jalan Masjid India. So I’ve always been interested in clothes, fashion and designing. I was always drawing. However, I later did law in UK to follow in my late father’s footsteps. I even went to the same law school as he did. Upon graduation, I helped him with his banking business in Indonesia and Malaysia,” says Sumayyah.

A month after she got married in 2007, her father succumbed to cancer. Five months later, her brother died in a hit-and-run accident. He was 24.

“I was devastated. I began to rethink life and death. I decided that I had to stop being depressed and find my purpose in life,” she says.

Sumayyah then joined the Young Muslim Project, where she made friends and new connections. Amid the soul-searching, an opportunity to further her studies in Scotland popped up. “When the offer for a scholarship in Islamic Studies came by, I decided to just do it. My husband fully supported my decision and even quit his job to seek employment in Scotland. My family supported my decision too,” she recalls.

Her studies eventually led her to conduct research on Islam and fashion. “As I worked on my thesis about Muslim fashion in Malaysia, I began to follow the blogosphere and research on that trend. I found out that there was a real demand for Muslim fashion, especially in Western countries. I researched deeper and found out that Muslim consumers in Indonesia and Malaysia are actually trendsetters,” says Sumayyah.

Through her research, Sumayyah also identified an entrance for her designs. “There are a lot of Muslim clothes with traditional cuttings, so I wanted to offer pieces that not only cover the aurat (modesty) with beautiful, easy to care and comfy material, but most importantly offer modern cuts too. Come to think of it, it is just dresses with long sleeves, hardly rocket science, but the market lacks such choices. I hope my dresses will be easily adopted by those looking for an alternative to the likes of baju kurung, jubah and abaya,” says Sumayyah, who prefers to sketch her design using pen on paper before transferring it to her computer.

With a startup investment of RM60,000, Sumayyah chose to make her dresses in China, which is cheaper compared with Malaysia.

“Like a lot of startups, I hesitated initially before venturing into the Chinese manufacturing market. Thankfully, through Alibaba.com, I managed to secure manufacturers who could handle my requests professionally and efficiently. We communicated via email and Skype. The reps spoke good English and whenever there were hiccups, we managed to iron things out. I also valued their feedback — they said they liked the pattern, cut and material that I’d come up with, so that gave me positive vibes,” she says.

With stock in hand, Sumayyah is ready to share three design series with the Malaysian and Australian market. “I have more designs but for a start, I am offering three dress series called Vintage Jannah, Royal Iman and Basic Fatihah, each with three colour options. They come in sizes ranging from XS to XL,” she says.

The Basic Fatihah maxi dress, which can also be worn by expectant mothers, is also available in XXL.

To create a buzz for her designs, Sumayyah relies on her knowledge of the Malaysian blogosphere. “I roped in three bloggers to help me spread the word out about Love To Dress. They are my sister, Asma who runs www.asmanasa.com, Maria Elena (peliks.blogspot.com) and Shahirah Elaiza (shaelaiza.blogspot.com). Each of them has tens of thousands of followers from around the world, and they’re such wonderful people to work with,” says Sumayyah.

What the trio are wearing and posting online are being copied by Muslims in western countries too, she says.

“The western Muslims are looking at us Malaysians and Indonesians because we are always open to adopting new concepts that observe the Islamic requirements — as long as they are beautiful. We love looking pretty,” says Sumayyah.

The clothes will be available from the end of the month at online Fashionvalet (www.fashionvalet.com) while Australians can get them at Sora Australia (www.lovesora.com.au), a portal developed by Sumayyah’s other sister.

“I chose FashionValet.net not only because the portal is popular here, but the site will also be expanding its reach to Brunei, Singapore and Indonesia. I hope with FashionValet I get to reach the rest of Southeast Asia. I’m also working out consignee arrangements with another online start-up, NJbyNaJA. Meanwhile, my sister Sarah is ready to kickstart her multi-brand fashion website Sora on July 4, so my designs came just in time for the launch,” she says.

Sumayyah believes her course of life would have been different had she not pursued Islam as deeply as she did then. “I would actually have just remained a merchant banker and be consumed by what this world can offer me,” she says.

Hoping for her venture to be successful, Sumayyah thinks her teaching career and designing instinct will likely merge in the future.

“I think teaching takes a lot of form and so does designing. I cannot run from who I am, and that is just another human being looking to make something out of herself. The talent that I have right now would be my love for design in clothes, but what lies deep within myself is my soul which yearns to find answers and to share those findings with my fellow humans. So if my business is successful… I think it will merge itself and I leave it up to God to surprise me where it might lead,” says Sumayyah.

Though having researched the industry for years and her designs are on the brink of commercialisation, Sumayyah refuses to call herself an expert on Muslim fashion.

“I am just a regular person looking for answers, so my version of Islam is very personal and only related to my very limited perspective based on my personal experiences. Because Love To Dress is so intertwined with who I am as a person, I hope that instead of a representation of Islam, it provides an alternative to what is out there, be it in clothes or in the understanding of Islam. When it comes to brand values, I hope that Love To Dress gives strength to women of faith across all borders to just be proud of their faith instead of trying to hide it,” she says.