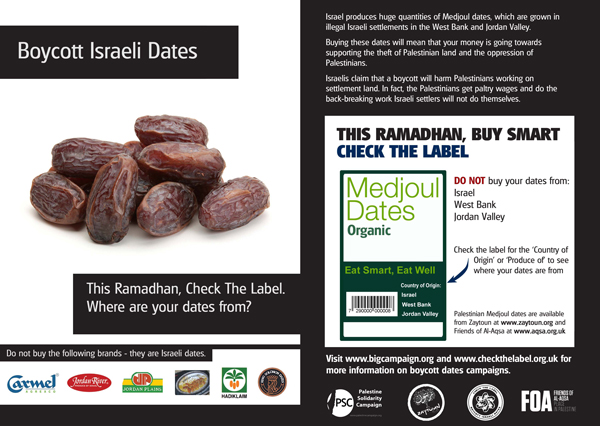 The Muslim community in the UK plans to launch a Ramadan campaign during Ramadan against Israeli settlements in the occupied Palestinian territories.

Nearly half of the settlements in the Jordan Valley grow dates, their most profitable crop, which contributes significantly to their economic viability.

The Muslim Association of Britain declares it will hold a national day of action against Israeli settlement policy.

“We want to draw everyone’s attention to the ‘Check the Label – Boycott Israeli Dates’ campaign by holding a national day of action,” MAB said in a statement.

The day activities include distribution of leaflets outside mosques after Friday prayers and putting up posters in mosques and local shops.

The campaign against the Israeli settlement policy is supported by more than 20 organisations, including Friends of Al-Aqsa and Palestine Solidarity Campaign, the biggest ant-Israeli group in the UK and Europe.

Israel produces huge quantities of Medjoul dates, which are grown in illegal Israeli settlements in the occupied west bank and Jordan Valley.

“Buying these dates will mean that your money is going towards supporting the theft of Palestinian land and the oppression of Palestinians,” asserts the MAB.

The Israeli counter-argument is that a boycott will harm the Palestinians working in the settlement.

Campaigners retort that those Palestinians are getting paltry wages and do the back-breaking work Israeli settlers will not do themselves.

According to the Boycott Israel Campaign in the UK, over 50 percent of the world’s Medjoul dates are produced in Israel and 60 percent of Israeli dates are grown on illegal settlement plantations in the Jordan Valley. Israeli made profits of $265 million from dates in 2011. Israeli settlements built on stolen and occupied Palestinian land have been ruled illegal by the International Court of Justice.