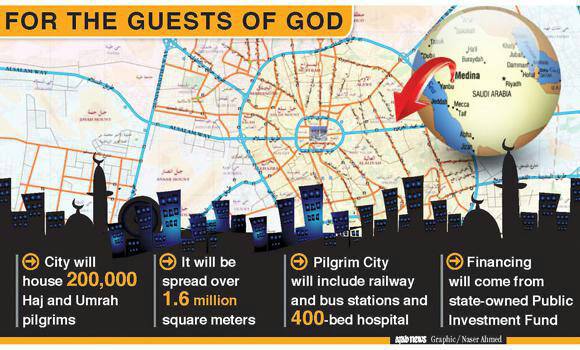 Saudi Arabia will build a “pilgrim city” for 200,000 Muslims who travel to Madinah for Haj and Umrah, Arab News has reported.

The state-of-the-art city would cover 1.6m square metres and include hotels, furnished apartments, a railway and bus station, government offices and a 400-bed hospital.

The project would be funded by the state-owned Public Investment Fund.

The kingdom is boosting its services and facilities at the holy city as an increasing number of Muslim pilgrims make the voyage.

Saudi Arabia is spending billions of dollars renovating and expanding the Grand Mosque, Islam’s holiest site, to allow it to hold 2m pilgrims at a time.

It is estimated about 6m pilgrims travelled to Madinah and Makkah for Haj or Umrah last year.