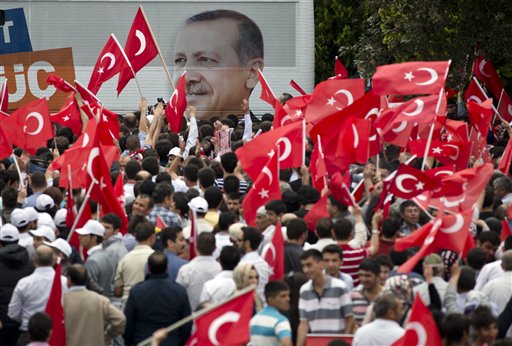 Turkish Prime Minister Recep Tayyip Erdogan has been welcomed by crowds of supporters in Ankara as he returned to the capital, hours after his spokesman ruled out early elections in response to a wave of nationwide protests.

Erdogan climbed on top of a bus to give a fiery speech after supporters gathered at Ankara airport on Sunday, waving Turkish flags and holding banners.

He visited the city of Adana earlier in the day, urging Turks to respond to the demonstrations by voting for his AK Party in next year’s local polls.

“I want you to teach them a first lesson through democratic means at the ballot box,” he said.

He also attended a meeting of his ruling party’s Central Decision and Executive Council in Istanbul.

Following the meeting, Huseyin Celik, the deputy chairman of the AK Party, said local and presidential elections would be held next year as planned, and a general election in 2015.

However, Erdogan’s opponents are vowing to keep up their demonstrations against what they say are his authoritarian and Islamist policies. Members of a group naming itself Taksim Solidarity Platform organised another rally in Istanbul on Sunday to “cry out their demands” and give an “answer to the government”.

The group’s demands include restricting police from using tear gas, release of all detained prisoners and the dismissal of officials responsible for the crackdown on the protests over the last few days.

Thousands of protesters together with the representatives of different political groups and labour unions gathered in the square to attend the rally.

The rally came after another night of mass anti-government protests. Riot police battled protesters with tear gas and water cannons in Adana and Ankara’s Kizilay Square.

The protests, initially triggered by controversial plans to redevelop the Gezi Park in Taksim, have entered their 13th day, with protesters camping in Taksim.

“A week ago, I could never imagine myself sleeping out on the streets of Istanbul,” said 22-year-old Aleyna, wrapped up under a blanket with a stray kitten, pointing to her dirty clothes. “Now I don’t know how I can ever go back.”

In a Twitter message, Istanbul governor Huseyin Avni Mutlu expressed his desire to meet the protesters amid criticism of his role in the response to the protests.

A heavyhanded police crackdown on the small campaign to save Gezi Park from demolition fuelled nationwide protests against Erdogan and his AK Party, seen as increasingly authoritarian.

Police have used tear gas and water cannons to disperse demonstrators in clashes that have injured thousands of people and left three dead, tarnishing Turkey’s image as a model of Islamic democracy.

The prime minister has previously dismissed the demonstrators as “looters” manipulated by extremists.