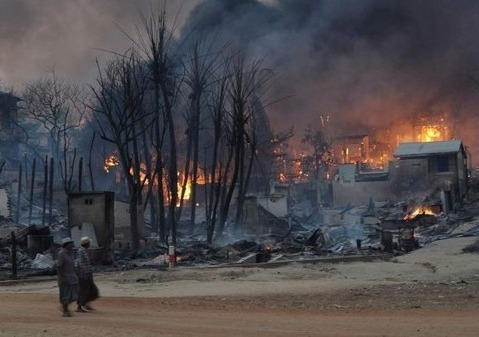 While violence orchestrated by Muslims against non-Muslims receives quick condemnation and is widely labeled as ‘Islamic Terrorism’, the opposite fails to obtain the same response.

The recent incident of the murder of a British soldier  by a person of Nigerian origin had wide media coverage and was linked to religious indoctrination, yet the reverse in Afghanistan by the British soldiers never happened to be a point of concern to the civilized world.

Further, while the death of the four American soldiers in error by drone attacks in Afghanistan caused the Obama administration to reassess the drone strategy, the continued victims of  the same pilotless-jet strikes killing and maiming thousands never caused tears into the eyes of the cultured ones.

While Muslims all over the world are under siege militarily, they are the ones to be judged quickly as perpetrators of violence.

The recent case of systematic killings of Muslims in Myanmar acknowledges the apathy and double standard of developed countries which are at the forefront of waging a war on terror.

Instead of sending a strong message to Myanmar in failing to contain the violence directed against Muslims, Barack Obama not only visited the country but also invited the leader of the Buddhist state to visit the United states of America.

Ignorance of the international community to the genocide of Muslims in Myanmar has only added to the rise of more attacks on Muslims in the country.

Truly, terrifying anti-Muslim violence has surged in recent weeks in Myanmar, exposing deep ethnic and religious tensions that threaten the existence of the minority.

Myanmar’s democratic  aspirations can never be fully realized if Muslims, who make up about 5 percent of the population, continue to be butchered and marginalized by Buddhists, the majority of the population.

Thousands of Muslims have died since the violence started last year with little attention from the international community to  contain it. The displaced and affected ones continue to suffer from the impending danger of Buddhist extremists.

Democratic aspirations of Myanmar at the cost of innocent Muslim lives have only exposed the political and diplomatic deception of the west. Turning a blind eye to the carnage is indeed one of the worst evidences of disinterest by the modern world.

News reports from the northern city of Lashio in Maynmar, near the border with China, told how Buddhist mobs, reacting to a quarrel between a Buddhist woman selling gasoline and her Muslim customer recently set fire to a mosque, a Muslim school, and shops. A government official said several Muslim men were killed in the violence.

The clashes indicate how radical strains of Buddhism are resurfacing in the region spreading as far as to the north-east Indian state of Assam.

The Muslim Rohingya people have been denied citizenship and are severely mistreated in the western state of Rakhine, where the local government recently restricted Rohingya Muskim family size to only two children.

Reuters reported that hundreds of Muslim families in Lashio had sought shelter in a heavily guarded Buddhist monastery after mobs terrorized the city and threatened them with dire consequences if they return.

If at all Myanmar wishes to attain its true democratic credentials, President Thein Sein must make clear that extremism will not be tolerated and that those responsible for the violence, including security officials who refuse to protect minorities, will be brought to justice.

The country must also chart the multi-ethnic, multi-religious vision that meets the expectations  of the global community to safeguard the interests of the marginalized.

The response of Daw Aung San SuuKyi, the Nobel Peace Prize laureate and leading opposition politician, after a long silence on the atrocities being committed against Muslims has already come under heavy criticism.

The United States and other powerful countries which have always been vocal against human rights violations and atrocities on minorities in Muslim or other countries worldwide must express the same concern for Muslim minorities being oppressed in Myanmar.

Failing to do so only makes clearer the double standard of the powerful lobby of the west when it comes to Muslims around the world and it will affect the relations with them in the long run.