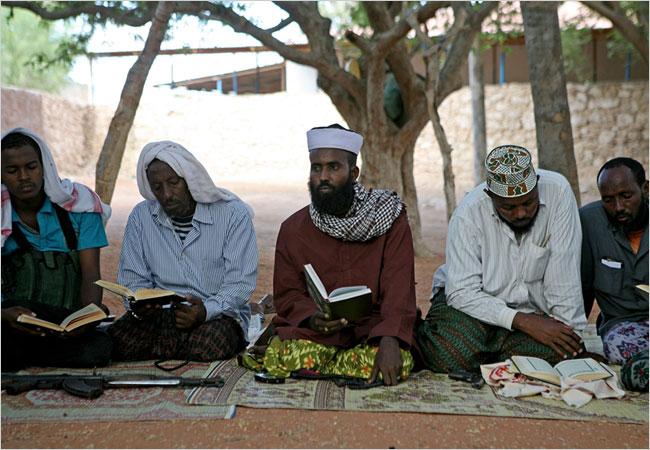 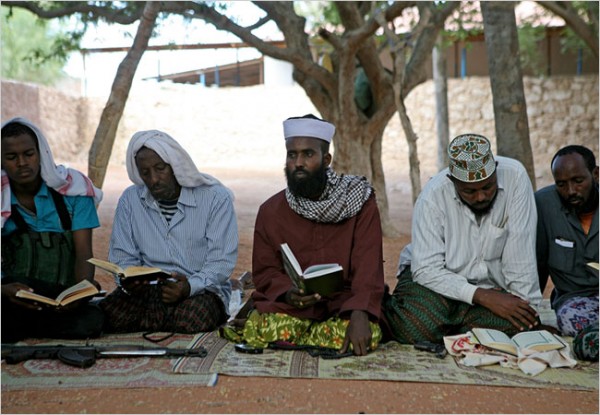 MOGADISHU, Somalia (AP) Hundreds of sweating Sufis chant and sway as the lead sheik moves into the middle of a circle of worshipers and bursts into a chant louder than anyone else’s

Sufism, a mystical branch of Islam, is having a major comeback since al-Shabab, an armed militant Islamic group, was pushed out of Somalia’s capital in August 2011. The Sunni-Salafi insurgents had banned Sufis from gathering and prevented them from worshiping. Sufi sheiks, or elders, were attacked, graves of their saints were desecrated and rituals and celebrations became rare or secretly performed.

Beyond the circle of worshipers are dozens of women, some of them so moved that they are crying. Nearby is the grave of a Sufi saint where the worshipers go to pray to show reverence. Free food, including toasted coffee beans fried in oil, is distributed in wooden containers.

“With Allah’s wish, we are here free and worshiping today,” said Sheik Abdullahi Osman, a 72-year-old Sufi cleric, who has beads dangling from his neck. Sufis in Mogadishu spend hours fasting, praying, and invoking Allah’s name. Traditionally Sufis used sticks to protect their shrines but now it’s common to see a guard with an AK-47 slung over his shoulder in this seaside capital.
“There’s no choice other than defending ourselves and our faith,” said Mohamed Ahmed, an armed Sufi follower guarding the gathering. The arrivals were being checked and other guards stood outside a gate.

Ruqiya Hussein, a veiled woman, traveled from an al-Shabab-held town 90 kilometers (55 miles) away to get to a place of worship.

“I am thrilled to see my sheiks come back to lead us again,” she said, squeezing her henna-tattooed fingers before she joined a group of women swaying and chanting rhymes.

Sufis were known for spreading Islam across Somalia through peaceful teaching and practicing tolerance toward other faiths. Some Sufis hope that their style finds fertile ground in a nation recovering from the wounds of extremism and war.

“Unlike others we don’t kill or harass people. Instead, we provide examples of how to live.” said, Sheik Abdirizaq Aden, the regional leader of the faith.

Al-Shabab, a group of al-Qaida-linked militants that seeks to instill an ultra-conservative brand of Islam across Somalia, controlled Mogadishu from roughly 2007 to 2011. The group still dominates most of south-central Somalia but has seen its territory reduced after military pushes by African Union and Somali forces.

The Sufis in the capital now feel free to practice their faith. In central Somalia, after the graves of sheiks were desecrated and killings occurred, Sufis used weapons to kick militants out of some key towns. The conflict in that part of the Horn of Africa nation persists.

Somalia fell into chaos in 1991 when warlords overthrew longtime dictator Siad Barre and turned on each other. Two decades of violence followed, but the capital and some other towns have seen strong security gains during the last 18 months that have allowed businesses and even sports leagues to thrive.