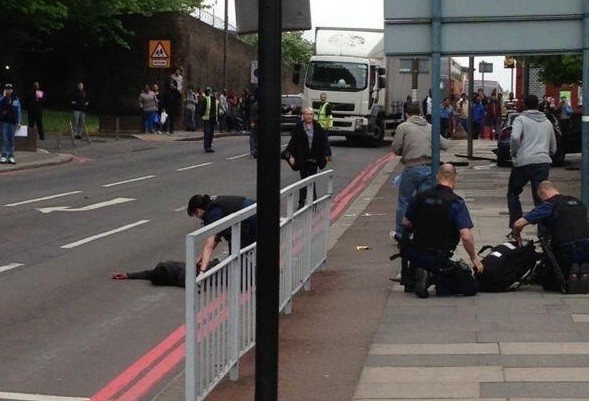 British Prime Minister David Cameron says the daylight killing of a man on a south London street near an army barracks appears to be a terrorist attack.

A special government emergency committee was called into session after the attack Wednesday.

Prime Minister Cameron called the killing “appalling” and said all indications point to a terrorist attack. Scotland Yard’s counterterrorism unit is leading the investigation, but few details were officially released.

Police shot and wounded the two suspects and they are under guard in a hospital. The victim is believed to be a British soldier, but has not yet been publicly identified.

Witnesses say the suspects appeared to hack the victim to death with butcher knives, leaving a stream of blood on the sidewalk.

British television broadcast a bystander’s video showing a man with blood-covered hands holding a cleaver and a knife. He said “you people will never be safe,” vowing “an eye for an eye, a tooth for a tooth.”

He apologized for women and children witnessing the killing, but said “in our land, women have to see the same.” He did not say what land that is. British reporters said he appeared to be speaking with a London accent.

A State Department spokesman condemned the attack, saying the United States stands with its British allies in the face of such senseless violence.