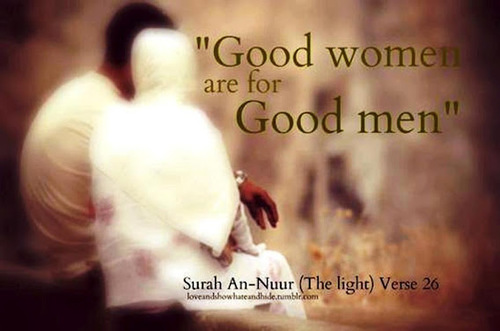 Many men and women in our communities live under the illusion that only men feel desire or have an interest in being sexual, and that women should not or cannot feel attraction, do not experience sexual pleasure, and can live healthy intimate lives without sexual satisfaction for lengthy periods of time.  This leads to misunderstandings and disappointments about wanting sex, initiating intimacy, and/or feeling excitement when sexual stimulation occurs.

This series of articles contains the perspectives of several Muslim women at different stages of life who have grown up and lived in different parts of the world, East and West, and want to share some insights with Muslim men – both married and unmarried – who don’t want sexually repressed, bitter spouses and failing marriages.  This is a look behind the scenes to aid understanding of a universal social issue. For the sake of privacy, each writer is identified only by her marital status. May Allāh bless all of us with loving, passionate, and fulfilling intimate lives.

With all due respect to my beloved and respected Shuyūkh, to whom I owe much of the knowledge I have gained about my religion, and for inspiring me to higher spiritual goals in my life, I firmly believe teaching female sexuality should be primarily handled by females – especially those who counsel on marital issues, psychologically or spiritually, and are familiar with the extended intimacy problems amongst women.

We already have issues with Muslim women not being sexually satisfied in their marriages, and these issues are exacerbated when women hesitate before approaching a male scholar to discuss their sexual challenges. It is time for us to acknowledge a serious problem we are facing in our Ummah: the issue of female sexuality.

Married 17 years, From the View of a Therapy Couch

Female sexuality is a source of confusion and frustration for many men due to misinformation. As a therapist, I have come across a number of issues faced by couples. Some men believe that women are not interested in sex because they are somehow disgusted by it.  Others think that women are not capable of being fulfilled sexually. Due to a lack of knowledge, experience and know-how, a multitude of men are not fulfilling their wives. As a result, many women experience painful sex without climax.  The majority of the clients I have done therapy with have expressed that sex is either painful or uneventful.

The reason that women are experiencing this level of disappointment is NOT because they are incapable of having fulfilling sexual experiences, rather it is because some men are detached emotionally from their wives and not fulfilling their needs outside the bedroom which prevents women from opening up in the bedroom.  Other men have corrupted themselves through over exposure to pornography and seductive pictures of surgically enhanced, air brushed women which as a result causes them to be overly critical of their wives who in turn feel inadequate and unattractive. When women don’t feel attractive or confident they will not allow themselves to be vulnerable and perform sexually. When men take the time to bond with their wives, nurture their relationship and familiarize themselves with sexual needs of their wives, they can be successful in fulfilling them on a regular basis.

In this vicious cycle of confusion and frustration with female sexuality there is hope! In order to improve the sexual experience for both husbands and wives, there needs to be a great effort put forth towards improving the marital relationship. When a couple has good communication, conflict resolution and commitment to excellence on a personal and marital level, then the environment is created which is conducive to romance, fulfillment and joy. Our Muslim brothers and sisters need to focus on increasing their knowledge, skills & emotional know-how in having the best marriage in order to increase their chances of a mutually enjoyable sexual experience.

Married 15 Years, On the Importance of Arousal

”On the authority of Jaabir bin Abdullah

and Jaabir bin Umar, both reported that the Prophet

said:“All things in which there is no mention of Allāh are frivolity, absent-mindedness and idle play, except for four things: a man being playful with his wife, training his horse, walking between two purposeful goals and teaching another man to swim.” [An-Nisa’ee in al-Ishrah and at-Tabaree] [1]

As someone who has been married for several years and has counseled women about intimacy, I see some core issues that frequently come up amongst those seeking counseling that I would like to share with both, husbands and husbands-to-be.

A lot of people (even women) don’t realize that when men and women become sexually aroused, their genitals become prepared for sex. In women this normally results in an enlargement of the clitoris and surrounding tissues (comparable to a male erection) and secretion of vaginal lubrication (i.e. she becomes wet).

Why is foreplay so important?

Imām Ibn Qudama [ra] the Hanbali Jurist narrates a hadith that the Messenger of Allāh said, “Do not begin intercourse until she has experienced desire, like the desire you experience, lest you fulfill your desires before she does.” (AlMughni 8:136)

I cannot stress the importance of foreplay enough. Men who cuddle and kiss their wives and know how to enjoy sensitive foreplay will often find that their spouses will not only enjoy sexual intercourse more, but will also reach orgasm  easier. The method varies from person to person – flirting outside the bedroom, talking, kissing, massage, touching, hugging, fondling, undressing, French kissing (which is from the sunnah [1]), petting – anything to get in the mood and more importantly to reach full arousal and enrich the sexual experience. Most women need prolonged stimulation in order to reach a state of complete arousal, and foreplay will provide them with the required stimulation (some don’t, and only a loving open relationship will let you know what your spouse needs and wants) and she will love you more for it.

Using lubricant is amazing as an aid but cannot be a substitute for natural arousal.

Dear brothers, giving pleasure to one’s spouse is an act of virtue with immense rewards. Ask her what makes her feel good and tell her what gives you pleasure. Listen to her voice, look into her eyes, watch her body –  they all give clues even if she is too shy to say anything. Lest someone thinks that these are all novel, 21st century ideas, many ahadith, classical Islamic books and our pious predecessors[2] paid a lot of attention to the needs of women.

that the Messenger of Allāh said…