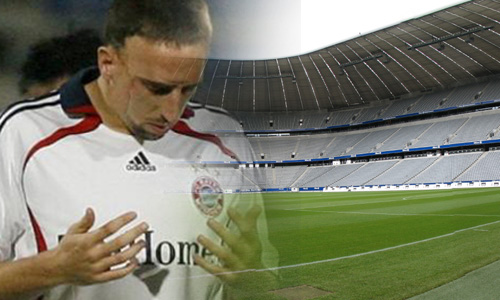 Helping their players to fulfil their religious duties, German football giants Bayern Munich have decided to build a mosque to help Muslim footballers to perform their prayers.

The German football club agreed to a request to build a mosque in the Allianz Arena stadium to serve its Muslim players and fans.

The request was made by the club’s Muslim midfielder Bilal Franck Ribery, who asked for specifying a small room for players to perform their prayers.

The new mosque would serve Muslim players and fans with a full time imam, an Islamic library and Islamic sessions.

The administration also announced that they will finance 85 percent of the costs of the worship place, leaving 15% to Muslim players and fans who want to participate.

The news about the new mosque was made public via the club’s official site.

Founded in 1900, Bayern Munich is the top tier of the German football league system, and is the most successful football club in Germany.

The football giants have won a record 23 national titles and 15 cups.

The club won its first national championship in 1932.

Bayern Munich is the biggest sports club in Germany and the fourth biggest football club in the world, generating €368.4 million in 2012.

Bayern is not the first European club to build a mosque for its Muslim players after New Castle United specified a prayer room for Muslim players.

The five prayer times are divided all through the day which starts with Fajr prayer at dawn.