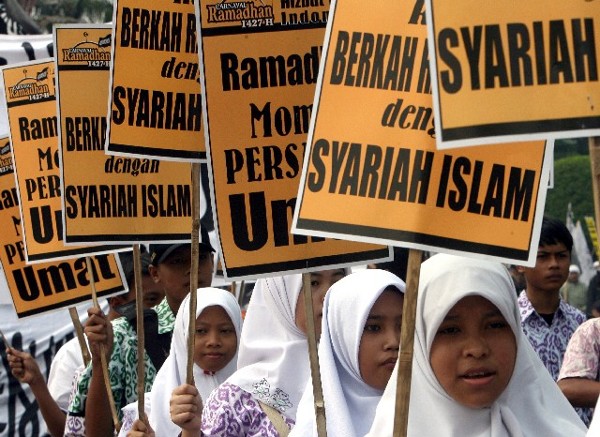 More than 70 percent of Indonesian Muslims are supportive of sharia law and want it to be a legal code in the country with the world’s largest Muslim population, according to a study by the US-based Pew Research Center.

The study, released earlier this month, also found that nearly half of Indonesian Muslims approved of corporal punishments — known as hudud — such as stoning for adulterers (48 percent) and amputation for thieves (45 percent).

“Religious commitment is closely linked to views about sharia,” the study says. “Muslims who pray several times a day are more likely to say sharia is the revealed word of God, to say that it has only one interpretation and to support the implementation of Islamic law in their country.”

The 226-page report is based on public opinion surveys conducted between 2008 and 2012 in 39 countries and territories in Africa, Asia and Europe, and involving 38,000 respondents. In Indonesia alone, the research center conducted face-to-face interviews with 1,880 Muslims in 19 provinces between Oct. 28 and Nov. 19, 2011. It has a margin of error of 3.4 percentage points.

The study says that 72 percent of Indonesian Muslims favor making Islamic law the official legal code in the country, compared to 86 percent in Malaysia and 77 percent in Thailand having the same opinion.

The finding will likely baffle local Muslim leaders and social scientists who believe that most Indonesians are secular and do not support the creation of an Islamic state or the application of sharia law.

Azyumardi Azra, the director of the Syarif Hidayatullah State Islamic University’s graduate studies in Jakarta, said he questioned the extent to which the survey result actually reflected the truth.

“The 72 percent figure doesn’t make any sense,” he told The Jakarta Post on Wednesday.

He argued that most Indonesian Muslims join mainstream organizations like Muhammadiyah and Nahdlatul Ulama (NU), which support the state ideology of Pancasila and promote moderation in the application of Islamic teachings.

Azra, who obtained his doctoral degree on Islamic history from Columbia University, questioned the methodology used in the survey. “The sampling method could be biased to justify Western media’s misconception that the majority of Muslims want the implementation of the Islamic criminal code.”

Adjie Alfaraby, a researcher from the Indonesian Survey Institute (LSI), said the questionnaire design might have affected the survey’s results. “If they present sharia as the only variable in their questionnaire, Muslims will definitely respond in favor to it. But if they put Pancasila as a comparative variable, maybe the respondents will choose Pancasila instead, because it is the core principle of Indonesia,” Adjie said.

He added that if the Pew findings were true then they should be taken seriously as 46 percent was no small figure. “A comprehensive survey investigating our society’s attitude towards corporal punishment must be carried out,” he said.

According to the report, most Muslims around the world believe the sharia is the revealed word of God and should be implemented in their respective county, though they mostly differ on its application. Generally, supporters of sharia are most comfortable with its application in cases of family or property disputes, the study says.

However, it also noted that in most regions, fewer favor other specific aspects of sharia, such as cutting off the hands of thieves and executing people who convert from Islam to another faith,