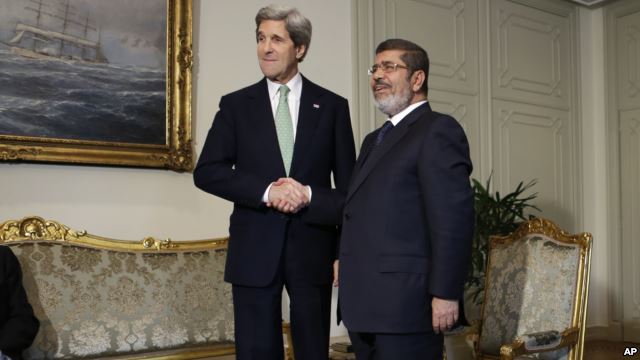 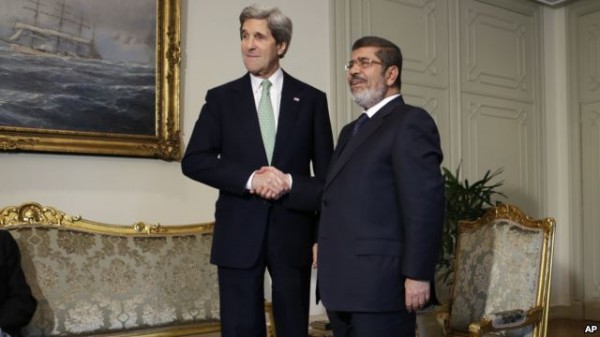 WASHINGTON — Almost a year after a Muslim Brotherhood candidate was elected president of Egypt, the United States is still trying to recalibrate its relations with a country that for decades has been one of Washington’s closest allies in the Middle East.

Muslim Brotherhood candidate Mohamed Morsi won the presidency last June promising voters they would have more civil rights than under former president Hosni Mubarak, who was forced from office during the Arab Spring uprisings that shook the Middle East and North Africa.

But Morsi has not yet delivered on many of his promises and President Barack Obama’s administration is finding it increasingly difficult to stand by him while holding firm in its demands for freedom and human rights in Egypt. The result, say Middle East analysts, is an increasingly complicated relationship between Washington and Cairo.

Hanna says continued U.S. engagement in Egypt is essential, but that Washington must make clear to Morsi and the Muslim Brotherhood that U.S. support is not a substitute for the support of Egypt’s own citizens.

“This is a critical message for America’s undemocratic allies in the region, and this conditional engagement represents the only plausible path forward for the United States,” Hanna said.

Since the Muslim Brotherhood’s victory in Egypt’s first democratic elections in six decades, the once-banned Islamist group has been faced with the task of cleaning up the corruption and reversing the political repression that flourished under Mubarak.

Progress has been slow, at best. The State Department’s annual report on human rights says Egypt’s transition to democracy is beset by political turmoil as well as the breakdown of law and order and established social norms.

“This breakdown has had the largest effect on society’s most vulnerable elements, including women and minorities, who often became the target of violent attacks,” the 2012 report said.

James Zogby, president of by the Arab American Institute in Washington, says the Obama administration may be considering a tougher approach toward Cairo, and if it does, would have solid public support.

A recent poll by the Arab American Institute indicates just 13 percent of Americans have a favorable opinion of the Muslim Brotherhood, while 53 percent do not believe the Brotherhood is committed to democracy.

Most significantly, 51 percent of Americans believe the U.S. government “should insist that rights be guaranteed for all citizens as a condition for any U.S. support.”

The Brotherhood’s rejection of equal status for women and the Coptic Christians, as well as its repression of opposition, have damaged its image, Zogby said.

He suggests restructuring U.S. aid to Egypt to be more sensitive to the facts on the ground. Such a change, Zogby said, would give policymakers flexibility.

The State Department has been pressing Congress to approve $450 million in direct aid to Egypt since last fall, but Congress is seeking to apply pressure on Cairo rather than provide unconditional support.

“Our approach is rather a measured approach of tying tranches [of aid] to results as it pertains to the peace treaty with Israel, to cooperation with respect to smuggling to Gaza, and with respect to economic reforms to guarantee civil rights and the rule of law within Egypt,” said Republican Ed Royce, chairman of the House Foreign Affairs Committee.

Both Republican and Democratic party members of Congress have proposed attaching conditions to the more than $1 billion in annual military assistance Washington gives Egypt.

But Amr Darrag, Egypt’s newly appointed minister of planning, argues that putting conditions on U.S, aid is the wrong approach.

“The Egyptian-American relationship is a strategic one, but to sustain it, it has to be correct on equal footing and based on mutual interests, and the U.S. aid is an investment in U.S. interests,” he said. “If we start talking about conditionality, it would not be a healthy relationship.”

Naguib Sawiris, president of the “Free Egyptians” liberal party, recommends that Washington not interfere, but should remind Egypt now and then of its priorities.

“The U.S. should engage with the Muslim Brotherhood, show its support for the Egyptian people by constantly reminding whoever is governing Egypt to respect the rule of law, the judicial independence, civil rights of all citizens and maintain all basic freedoms,” Sawiris said.

And Hanna says the U.S. government should not assume that the Muslim Brotherhood will dominate Egyptian politics forever, and that it should reach out to the opposition because a new, viable leader may emerge from it.