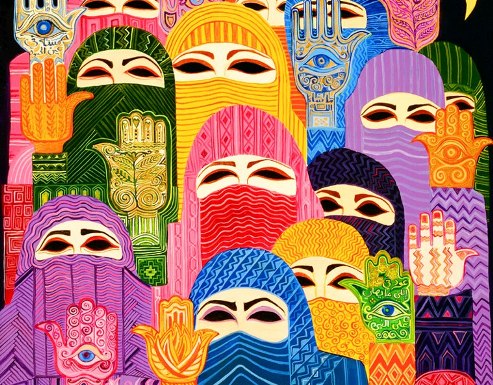 (WNN/VOA) San Francisco, California, UNITED STATES, AMERICAS: The online Muslima exhibition, by the International Museum of Women, highlights the individuality of Muslim women and the rich diversity of their thoughts and contributions. The exhibit’s curator says one of the goals is to dispel negative stereotypes.

The Arabic word “muslima” means a woman who believes in God.

“When we think of Muslim women, we think that they are as weak, passive women who also happen to be veiled,” said Samina Ali, an Indian-born Muslim novelist, artist and activist.

The exhibit uses art, film, music, and interviews to present a portrait of Muslim women that is opposite of the stereotype, presenting strong and involved women who are determined to improve their societies.

“We have a beautiful documentary called Half-Value Life by Alka Sadat,” Ali said, “and she’s speaking about the struggle that women in Afghanistan have faced under the Taliban regime and continue to face now and how women aren’t valued.”

The filmmaker documents the struggles of Marya Bashir, a public prosecutor and women’s rights activist, who fights to eliminate political corruption and violence against women.

“I wanted to show that the women are powerful in Afghanistan,” Sadat said. “If they get an opportunity to work, some women are trying to help other women.”

Appearance is another issue closely associated with Muslim women, who are often identified by what they wear.

“When I go out I feel comfortable wearing the hijab, I wouldn’t feel comfortable otherwise. [It’s] something as simple as putting on a little blush or a little bit of lip gloss,” said Boushra Almutawakel, a photographer from Yemen.

Though comfortable under her hijab, she doesn’t like it when society imposes extreme covering.

For her series in the exhibit, “Mother-Daughter-Doll,” she posed with her daughter and her daughter’s doll. In a sequence of photos, we first see the three of them uncovered, and gradually, disappearing under layers of garments.

“You have the abaya. Then you have a thing over the abaya, then the neqab, then the veil over that, then the black gloves,” said Almutawakel. “I just found it so alarming. To me personally, I don’t find it has anything to do with religion. I felt like they are trying to cover women out of extinction because the next thing from covering them up is just stay at home, you might as well not even be seen. That’s the idea behind the ‘Mother, Daughter, Doll’ series.”

Raising strong, self-confident young women is what Ilyasah Shabazz considers essential for advancing any society. The daughter of outspoken black activist Malcolm X says she was inspired by her mother, Betty Shabazz.

“She made sure that we were raised proud to be of the African diaspora, proud to be women, proud to be Muslim,” Ilyasah habazz said. “I think we have to pass those values to our children.”

Shabazz encourages Muslim women everywhere to become more involved in their own societies, to help bring about positive change and to work globally with one another.

“I was in Mali with Muslim women there. I was on an interfaith delegation to make sure that the mothers had the shots or the bed-nets for the malaria,” she said. “[There are] so many different forms of empowering people.”

Through words and images, the International Museum of Women hopes to inspire and educate web visitors. Catherine King, who heads the museum, also wants to encourage action.

“We really want to make this a vibrant, interactive experience for our visitors. We’ve created the ‘Speak Up! Listen Up’ action campaign, which visitors can join,” King said. “We’ll be updating them about new additions to the exhibition, new opportunities to learn about issues, ways to get involved.”