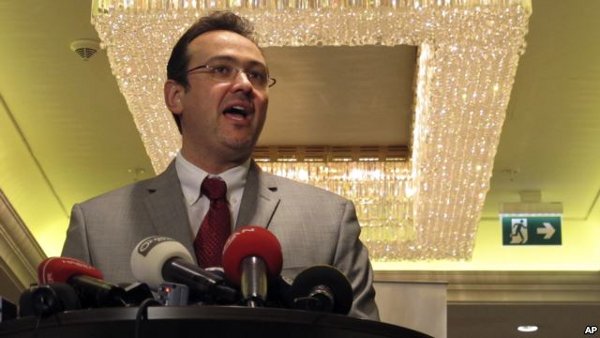 Syria’s opposition coalition has responded to a U.S. and Russian call for peace talks to end the Syrian civil war by saying any political solution must begin with President Bashar al-Assad leaving power.

Speaking to VOA by phone from Istanbul, Syrian National Coalition spokesman Khalid Saleh reiterated the group’s longtime demand for a peace process to start with the departure of Assad and the pillars of his government.

He said those “pillars” include the heads of Syrian security systems responsible for killings of Syrians during the two-year conflict.

After meeting in Moscow, the two diplomats said they will try to persuade both sides to negotiate on the basis of a political transition plan backed by major powers in Geneva last June.

That plan calls for the Syrian government and rebels to agree on a transitional government leading to elections but does not specify the fate of Assad.

Kerry said it is “impossible” for him as an “individual” to see Assad governing Syria in the future, but he added that the Syrian president’s fate is not for him to decide. The United States has long called on Assad to quit for leading a deadly crackdown on dissent.

Opposition spokesman Saleh said he does not believe Kerry’s remarks represent a shift in the U.S. position.

He also appeared to offer the Assad government an opening for entering into talks with the opposition.

“If the Assad regime is serious, I believe it can start by releasing 200,000 prisoners in its jails, it can start by pulling its military out of the cities,” Saleh said.

The Syrian government had no immediate response to the Kerry-Lavrov appeal for peace talks. It has released some prisoners in the past but opposition figures have dismissed those moves and other gestures as too little, too late.

Saleh also welcomed what he described as a shift in Russia’s position on Syria’s future. He noted Russian Foreign Minister Lavrov’s remark that Moscow is interested in the fate of the Syrian people, not of “certain individuals” – an apparent reference to Syrian leaders including Assad.

Moscow repeatedly has rejected foreign calls for the ouster of Assad, a longtime Russian ally. But, it also has tried to distance itself from the Syrian president’s political future.

Saleh said Lavrov’s concern for the Syrian people rather than their leaders “is in the best interests of everybody.”

He said the initiative is “only a first step,” but added that he has “every reason to expect” that all members of the U.N. Security Council will cooperate to carry the process forward.