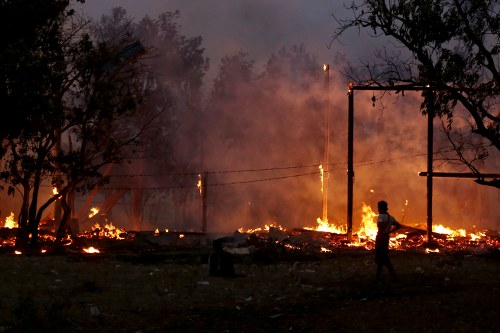 At least one person has died and 10 people have been injured in central Myanmar after Buddhist gangs set fire to hundreds of homes and overrun two mosques.

Tuesday’s flare-up in Okkan, 110km north of Yangon, is the latest anti-Muslim violence to shake the Southeast Asian nation since late March.

In Chauk Tal, an outlying village, leaping flames still rose on Tuesday night from the remains of several fiercely burning structures, while distressed villagers cried and hurled buckets of water to try and douse the flames.

Residents said as many as 400 Buddhists armed with bricks and sticks rampaged through the area.

Eighteen people are reported to have been arrested.

The mobs targeted Muslim shops and ransacked two mosques; about 20 riot police were later deployed to guard one of them, a single-story structure, which had its doors broken and windows smashed.

In Okkan, two mosques were overrun and looted, while more than 100 Muslim homes in three nearby villages were torched in arson attacks.

“They came around 1pm and most of the people were from this town, not from outside. There were around 50 of them,” said Khin Maung Than, a 60-year-old shopkeeper in Okkan.

Local police said hundreds of people participated in the attacks.

Stopping the spread of sectarian violence has proven a major challenge for Thein Sein’s reformist government since it erupted in western Rakhine state last year.

Human rights groups have recently accused the president’s administration of failing to crack down on Buddhist anger.

Last week, Human Rights Watch issued the most comprehensive and detailed account yet of the violence in Rakhine state.

The report accused authorities, including Buddhist monks, local politicians and government officials, and state security forces, of fomenting an organised campaign of “ethnic cleansing” against a Muslim minority known as the Rohingya.

Muslims account for about four percent of the nation’s roughly 60 million people.

About one-third of the nation’s population consists of ethnic minority groups. Some have waged wars against the government for autonomy.