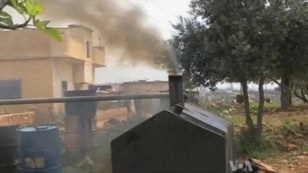 The European Union recently lifted the embargo on oil coming from opposition-controlled areas in Syria. But there are doubts about how quickly the rebels will be able to start trading with the EU. Meanwhile, “backyard” refineries are springing up as impoverished Syrians try to make some money.

In his backyard north of the city of Idlib, Ahmed Abu Taleb and his friend use handpumps to transfer a barrel of crude oil into a tank.

A fire burns in a pit dug below the tank. Then drip by drip, through a simple system of pipes, the distilled products – fuel oil and diesel – empty into lined trenches nearby.

Few of the workers are trained. No one wears protective gear, and the fires burn next to tanks full of fuel. Abu Taleb said the risks are worth it. In 24 hours, he extracts nine barrels of fuel.

Taleb said he gets the crude oil from the freed areas, or from oil wells freed by the Free Syrian Army. He says it’s used to provide gasoline to areas that need it. The makeshift gas stations, he said, provide a lifeline for local residents who struggle to heat their homes.

As the Syrian civil war has intensified, U.S. data indicates that oil production in the country more than halved between 2011 and 2012. That’s mainly due to EU sanctions, said David Butter of London-based policy institute Chatham House.

“The sanctions actually did stop production because foreign operators pulled out. Also the Syrian government didn’t really have anywhere to put the oil, it had limited capacity to put the oil through their refineries,” Butter explained. “And limited storage capacity when their export options were cut off.”

In recent days, EU ministers lifted the embargo on oil coming from areas of Syria held by the opposition.

The EU’s foreign policy chief is Catherine Ashton. “Three types of transactions will now be possible: imports of oil and petroleum products, exports of key equipment and technology for the oil and gas industry and investments in the Syrian oil industry,” she said.

But David Butter of Chatham House says it will be a long time before the EU starts buying oil from the opposition. “Most of the oil is under the control of various other groups. Most notorious of course is Jabhat al-Nusra which has an al-Qaida connection, and many other groups. So there’s no sense that they are centrally controlled by an opposition body with which companies in the EU could actually do business with,” he added.

Syria has denounced the EU’s decision. Before the uprising, the IMF estimates oil exports accounted for a quarter of government revenue.

Abeed Mayaleh, governor of Syria’s Central Bank, said he does not understand how the European Union can give what he calls armed terrorist groups the right to export oil to Europe. This is money laundering, he said. This is stolen money and these are stolen goods.

As Syria’s economy continues to suffer, primitive refineries are springing up in backyards across the country: a dangerous business but a way to survive amid the conflict.