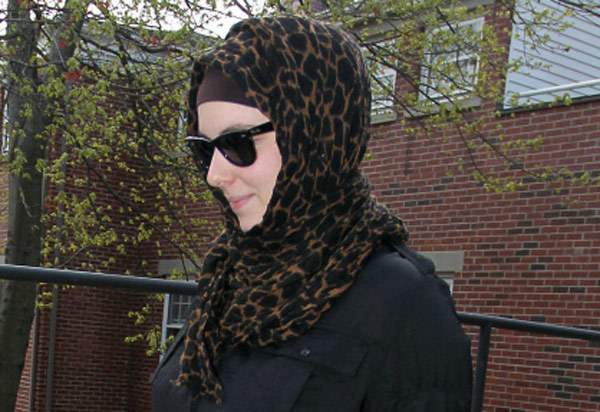 When pictures first emerged of Katherine Russell I was not taken aback by the “strange” scene of a hijab-wearing white American woman from a well-educated family, quite the contrary – I felt a sense of connection to the young woman donning clogs and an animal print scarf; myself an American convert to Islam, looking at a picture of Russell was a lot like looking in the mirror. Interested in the case (as all Americans are), but particularly interested in the role Tamerlan Tsarnaev’s wife played, I began to seek out news articles about Russell.

I experienced a strong sympathy when I saw the now-famous photo of her, panic-stricken and trying to escape reporters. I felt very sorry for this young mother, who, by all accounts thus far, not only had nothing to do with her husband’s terrorism, but was kind, hard-working  and artistic. I imagined the complex and intersecting layers of grief, fear, anger, shock, and hopelessness that Russell must be facing and I wondered how anyone, aside from a handful of people spread across the globe, could begin to understand what it feels like to be in Russell’s position.

What also struck me was the way Russell’s conversion to Islam was being used by many news outlets as evidence of her fall from grace – as the strongest sign that she was not mentally stable. Reporters continually questioned how the daughter of an Exeter and Yale graduate could do something as insane as become a hijab-wearing Muslim. Surely she must have been abused and brainwashed – who in their right mind would give up the quintessential, elite New Englander lifestyle for…faith?

Reporters keep quoting “friends” of Russell’s who essentially say she went crazy – suddenly converting to Islam, dropping out of college, getting married, and having a baby. If we remove the “converted to Islam” or “started wearing a headscarf”part of Russell’s story, is there anything profoundly unusual about someone dropping out of college or getting married? Sure, Russell’s may not be the ideal sequence of life events, but is it remarkable? What smacks of an “ism” to me – be it colonialism, eurocentrism, or racism – is the underlying message that there is no way, aside from mental illness or duress, that a well-educated, white woman from a wealthy American family would choose to convert to Islam.

See, this is where my sense of connection to Russell runs deeper than clothing choice. If someone freeze-framed my life a few years ago, and the lives of many of my friends, they would find many similarities with Russell’s journey. I come from a relatively well-educated, upwardly mobile, white, Christian, American family. Until my late teens, not a single person would have described me as religious or as having the slightest interest in religion. In college, after reading the Quran for a class and doing a great deal of subsequent research, I converted to Islam. This change – this new identity, was overwhelming at first. When financial factors collided with the struggle to navigate my old life as a new Muslim, I withdrew from college. During the time I was out of school I got married to a Muslim man, moved to the Middle East, and had a child. If we stop the story there, if we fail to shade in the picture with context and detail, mine could easily be a tail of tragedy, brainwashing, and Not Without My Daughter levels of drama.

But what if we told the story of a girl who joyfully and thoughtfully found her spiritual home after years of floating nebulously through a sea of religion she did not believe in? What if we told a love story about a young, mouthy American woman who falls for a handsome, reserved, Egyptian and fights tooth and nail to get his family to accept her? What if we told the story of a woman full of wanderlust who, having always dreamt of following in her parent’s globe-trotting footsteps, jumped at the chance to live in the Middle East and loved every moment of her time there? And what too, if we told the story of a woman who finished her bachelor’s degree while living abroad, returned to the United States – baby on hip, scarf on head – and received a Master’s degree from an Ivy League university, is currently a doctoral student at an Ivy League university, and lives a rather idyllic, if not hectic, life in the suburbs with her wonderful and supportive husband?

Context matters, context always matters. What makes Katherine Russell’s life disturbing and tragic is not her conversion to Islam. Russell’s life is disturbing and tragic because she was married to an abusive, deranged murderer. No one but Russell knows the circumstances that led to her religious conversion, or if she will remain a Muslim in the future, but it needs to be clear that monolithically synonymizing the act of converting to Islam with mental instability is xenophobic, offensive, and outrageous.

Each night when I kiss the chubby cheeks of my five-year-old son I think of the beautiful, bright eyes of Martin Richard…and of Krystle Campbell’s freckles, and Lingzi Lu’s smile – and I pray that the victims are in a place of utter serenity, and I pray that their families find sources of comfort and hope amidst the abysmal pain and loss…and now too, I pray for Katherine Russell and her daughter, for what, exactly, I’m not sure.