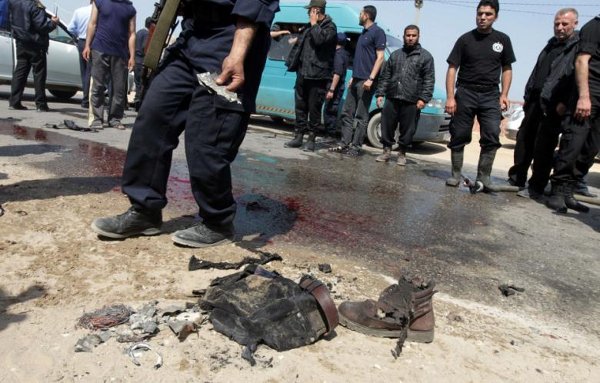 JERUSALEM — An Israeli air strike has killed a Palestinian man in the Gaza Strip, the first deadly air strike in the Palestinian territory since a truce five months ago ended eight days of fighting that killed more than 100 people.

Israeli Defense Forces say the airstrike Tuesday targeted Haitham Mishal, a Gaza resident who they said was a member of the Islamist militant group Mujahideen Shura Council of Jerusalem.

A spokesman for the Gaza Health Ministry said he was a policeman.

The Israeli announcement said Mishal played a role in the rockets fired two weeks ago from Egypt’s Sinai Desert that hit the southern Israeli city of Eilat. There were no casualties.

He said the strike is a continuation of Israeli policy of refusing to accept the sporadic firing of rockets either from Gaza or the Sinai.

A dozen rockets fired by militants in Gaza have landed in southern Israel in recent weeks without causing any casualties.

Islamic militants have become active in the Sinai since security deteriorated there following the fall of former President Hosni Mubarak.

Israel says many of the militants in Sinai have infiltrated from Gaza.

Israel accuses the Hamas movement that controls Gaza of responsibility for the activities of all these groups.

A Hamas spokesman called the attack a dangerous and unjustified escalation.

The airstrike in Gaza came amid rising tensions in the West Bank.

Israeli settler Eviatar Borovsky was stabbed to death Tuesday by a Palestinian man near the Palestinian city of Nablus.

Shabtai said two policemen positioned nearby opened fire and wounded the attacker who was taken to a nearby Israeli hospital.

He said Israeli security forces were investigating, but initial indications were that the suspect acted alone.