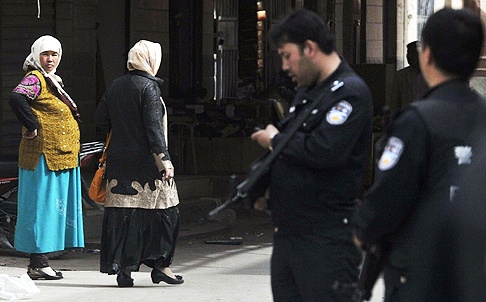 BEIJING — A top Chinese security official says more suspects have been arrested in connection with a violent clash in China’s western region of Xinjiang that left 21 dead. The names of those who died in the incident last week were released Monday and a memorial service was held, but little is known about the alleged attackers.

Eight suspects were taken into custody last week, and now Vice Public Security Minister Meng Hongwei tells state broadcaster CCTV that more are being questioned.
However, just how many people are being held by authorities is unclear.

“The investigation into the case has made significant progress and that most of the details are already clear,” said Meng, explaining that a group of terrorists have been arrested and that self-made explosives, weapons and banners of the East Turkestan Islamic Movement have been seized. China has said the clash was part of a major terrorist attack.

Beijing’s policies in Xinjiang are a source of discontent to the indigenous Uighur residents, and some people support an effort to establish an independent state of East Turkestan in Xinjiang. Uighurs are a Muslim group of Turkish origin that live mostly in the Xinjiang region.

Last week’s violent clash was the worst in recent years, but unlike other incidents, most of the individuals who died were members of the ethnic Uighur minority — both the alleged attackers and authorities who were on the scene.

State media say the incident occurred during a house visit. Overseas Uighur groups, however, say police sparked the incident during an illegal search of homes.

Ilham Tohti, a Uighur scholar from the Central University for Nationalities in Beijing, says that while he does not condone any kind of violence, the official version of the story raises many questions. It is unclear why officials went to the home, said Ilham, who asks how members of one family were all terrorists and all happened to be in their home.

“According to the official media, [authorities] went into the family’s home for a visit. If these people had not done anything, then why did officials enter their homes? That is one question,” he said. “Secondly, the official media said that these people were members of a family. Is it possible that terrorists would be all members of one family in their own home? Isn’t there also a possibility that officials were carrying out a house visit and then some conflict occurred?”

Barry Sautman of Hong Kong University of Science and Technology, an expert on China’s ethnic policies, says that while there is no way of knowing what happened at this point, there could have been some third alternative.

“There are lots of incidents around the world in which there are people who have what are often labeled as extremist ideas, who are set off to take violent actions not by some overriding world view, but rather by some form of localized conflict, some clash with the local authorities at one or another level,” he said. “So it’s quite possible that there was some action taken by the local authorities that was seen by people in that family as being provocative to them in some way, and that the violence resulted from that.”

Two local Chinese Communist Party officials, including a local party propaganda chief, and Liu Xuliang, a branch party secretary, were also among those killed. Liu’s elder sister, Liu Cailing, told Hong Kong-based Phoenix Television that her brother and others who went to the home helped stop a major violent incident that was going to occur the next day, April 24.

State television showed footage of the home in Xinjiang where the clash occurred. There was little left of the structure except for walls and the collapsed remains of the residence.