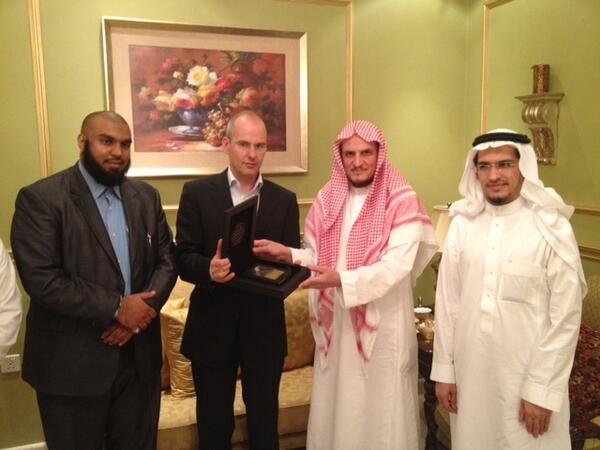 Doorn was among the Freedom Party leaders who produced the blasphemous film, Fitna. Last month he reverted to Islam after an extensive study about the religion and the Prophet (peace be upon him).

He said that the worldwide outrage against the film made him study about the Prophet (pbuh) and that eventually led to his conversion.

He headed for Makkah to perform Umrah after meeting the two imams of the Prophet’s Mosque, Sheikh Ali Al-Hudaifi and Sheikh Salah Al-Badar, who enlightened him on how to lead the life of a good Muslim and confront challenges facing Islam in the West.

A member of the Dutch parliament and The Hague City Council, Doorn announced his decision to accept Islam on his Twitter profile. He also posted a tweet in Arabic declaring that “there is no god but Allah and Muhammad is his Prophet.”

At first, other users took the news as a joke. After all, an active supporter of a notorious Dutch hater of Islam, Wilders, he repeatedly approved Islamophobic statements and public actions, and personally participated in them.

But Doorn, who now serves as a regional adviser at the City Hall in The Hague, personally confirmed his decision to practice Islam in an official letter to the city mayor.

Most recently, the politician filed a formal application to the mayor of the city to allow him to perform prayers obligatory for Muslims during his working hours.

“I can understand people are skeptic, especially that it is unexpected for many of them,” Doorn told Al-Jazeera English satellite channel.

“This is a very big decision, which I have not taken lightly.”

“In my own close circle people have known that I have been actively researching the Qur’an, Hadith, Sunnah and other writings for almost a year now,” he said.

“In addition, I have had numerous conversations with Muslims about the religion.”

Driven by his party’s anti-Islam discourse, Doorn decided to dig in for the truth about the religion himself.

“I have heard so many negative stories about Islam, but I am not a person who follows opinions of others without doing my own research,” he said. “Therefore, I have actually started to deepen my knowledge of Islam out of curiosity.”

The 46-year-old has continued on The Hague Council as an independent candidate since splitting from Wilders’s party. Doorn’s decision to embrace Islam has won mixed reactions in the Netherlands.

“According to some people I am a traitor, but according to most others I have actually made a very good decision,” he told Al-Jazeera.

“The reactions are generally positive and I also received quite some support via twitter.

“It feels good that people who do not know me personally have understanding of my situation and support me in my choice.”

Asked if he now regretted joining the Freedom Party, he replied: “I have learned that every experience in life has a purpose. However, with the knowledge I have today, I would have undoubtedly made a different choice.”

For the Dutch politician, finding Islam was finally guiding him to the true path in his life. “I have made mistakes in life as many others. From these mistakes I have learned a lot,” Doorn said.

“And by my conversion to Islam I have the feeling that I finally found my path. I realize that this is a new start and that I still have much to learn as well.”