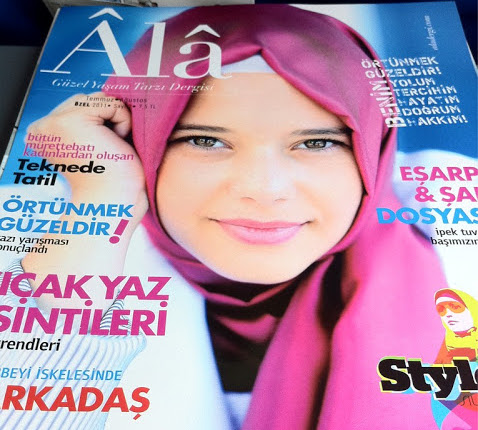 By: Sarah A. Topol

In Istanbul on a recent Friday, it was time to send the page proofs of Ala magazine to the printer. Ala, which means “the most beautiful of the beautiful,” is the world’s first fashion publication for conservative Muslim women. Its office doesn’t feel like a bastion of traditional Islam: The talk is of models, photo shoots, deadlines, and accessories.

Zeynep Hasoğlu, Ala’s new editor in chief, sits behind a giant desk, her brown eyes amplified with dark eyeliner and mascara. She wears a black blazer with matching pants, her tiny frame weighted by a massive tiered rhinestone collar necklace. Stiletto shoes complete her outfit—a look that many of her readers want. “We are trying to convey international fashion to ladies without infringing on our values,” says Hasoğlu. She flicks through her iPad as she describes an unfulfilled need of affluent women who have money to burn but little understanding of how to spend it. They don’t know about Islamic designers because Muslim fashion has been a word of mouth industry.

Ala, launched in 2011, is the primer these women want. It features models in head scarves with well-crafted outfits in the latest colors. One recent article, titled “Looooooong skirts!” gives tips on skirt designs and mixing and matching. A recurring section visits Istiklal Street, the central retail promenade on the European side of Istanbul, to photograph fashionable but conservative women. Like many of Ala’s readers, they sport sleeves that fall at least to the middle of the forearm and no bare leg is revealed. Yet with their head scarves they wear jeans and boots or skirts and form-fitting jackets.

Taha Yasin Toraman launched Etesettür.com 15 months ago. That’s Turkish for hijab, the veil worn by observant Muslim women. The site sells black cloaks that cover the whole body as well as tight pea coats that hug the waistline. “There are many online shopping websites in Turkey, but there were none for conservative women,” Toraman says. He is launching an English-language site by August for the rest of the Muslim world.

Turkey’s fashion industry has its detractors, who condemn the idea that conservative women can wear flattering modern apparel. Women should instead avoid drawing attention to themselves, as Islam calls for. Female attire has long been a contentious subject. Mustafa Kemal Atatürk, the secular founder of modern Turkey in the 1920s, urged Turkish women not to cover their hair. After a military coup in 1980 momentarily checked the rise of the Islamic parties, the government banned head scarves for university students and public servants. The ban was partially lifted in 2010.

Under Sunni Prime Minister Recep Tayyip Erdoğan, Turkey has enjoyed a decade of prosperity, which has given rise to an Islamic middle class. It is widely reported in the media that around 60 percent of Turkish women now wear a head covering. Mehmet Dursun, chief executive officer of Armine, Turkey’s top retailer of Islamic fashion, cornered the local head scarf market nine years ago before becoming a one-stop brand for middle-class Muslims. The retailer has a house line of apparel, shoes, and soon handbags, to be made in the same factory that makes Michael Kors bags. Armine apparel and accessories are sold in 1,400 stores, including in the U.S., the Netherlands, and Britain. Gross revenue in 2012 was $56 million. “I would like to be the conservative Hermès further down the line,” Dursun says.

The one thing absent from Turkey’s fashion scene is name-brand designers: Most work in relative obscurity for retailers like Armine. One exception is Filiz Yetim, maker of bridal gowns for the modest. Yetim, who on an April day was wearing a beige head scarf, a black blouse tucked into a long beige pencil skirt featuring floral appliqués, and gold and silver bracelets, designs gowns that feature a head scarf, full sleeves, and a floor-length hemline. The going price averages $4,000 to $5,000—not much for a handmade item. Yetim says she’ll charge more in time. “In two years, this vision of personal fashion will be more established, and we will ask what is due,” she says.

The bottom line: Turkey’s fashion designers are reinterpreting traditional dress for Muslim women, creating a new industry in the process.