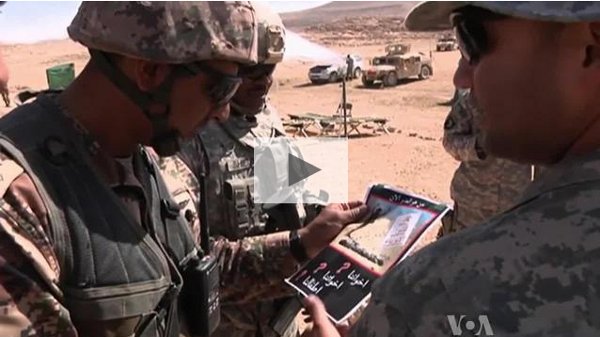 THE PENTAGON — Analysts say the new U.S. forces the Pentagon is sending to Jordan signal a deepening U.S. involvement in the prolonged conflict in Syria.

U.S. military experts have been in Jordan already, training Jordanian troops working to prevent a spillover of violence from Syria.

Defense Secretary Chuck Hagel told Congress he is boosting that force by deploying a U.S. army headquarters element.  The aim: to be able to set up a more permanent presence to deal with a number of scenarios.

“The Department of Defense is funding over $70 million for activities in Jordan including providing training and equipment to detect and stop any chemical weapons transfers along its border with Syria and developing Jordanian capacity to identify and secure chemical weapons assets,” said Hagel.

Pentagon officials said troops already in Jordan will leave as the new forces come in — to keep the total number at or below the 250 authorized to be on Jordanian soil.

The incoming forces will be rotated in from the Army’s First Armored Division based at Fort Bliss in Texas with the capacity to respond to chemical weapons attacks, conduct humanitarian assistance efforts and carry out what the Pentagon says are stability operations.

Syrian leader Bashar al Assad warns the United States and its allies they will pay the price for what he says is their support of al-Qaida-linked rebels in his country — a claim he did not substantiate.  He vowed not to surrender.

But defense officials this week said for the first time they believe the conflict in Syria could be stalemated.

Analyst Michael O’Hanlon said whether Assad goes soon or lingers on, the U.S. is having to reassess its approach.

“As we see Assad now surviving for two years, 70,000 or more people killed by this, we’ve got to start asking some pretty hard questions.  At a minimum, you’ve got to do a better job with humanitarian relief and refugee flows, but you may have to start asking if indeed the kinds of means we’ve used so far are inadequate,” he said.

The United States is providing non-lethal aid to the rebels and wants no direct intervention.

Analysts said this week’s announcement by Hagel signals the Pentagon is strengthening its posture to deal with a conflict that some in Washington — two years ago — predicted would last only a few months.