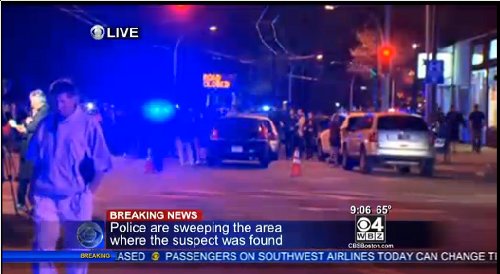 Boston Marathon bombing suspect, Dzhokar Tsarnaev, 19, has been reportedly apprehended hours after police converged on a house in Watertown, Massachusetts.

Tsarnaev was reportedly in a boat behind the house. The owner of the house discovered blood in her backyard after citizens there were allowed to go about their daily life’s after being confined indoors the entire day. Shortly after police moved in shots rang out at the house before it was surrounded by authorities.

Overnight, the suspect and his brother, Tamerlan Tsarnaev, continued their reign of terror. The two killed a MBTA police officer Thursday evening near the campus of MIT before a chase led to Boston suburb Watertown. There a 200-round gun fight left Tamerlan dead and a number of police officers wounded. Dzhokar fled on foot.