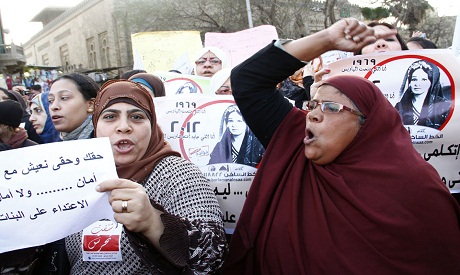 CAIRO — In Egypt, women’s rights groups are pushing back against some Islamists’ attempts to blame women for an upsurge in sexual harassment.

Post-revolution, the number of women reporting sexual harassment and violence has skyrocketed.  So, too, it appears, has the tendency to blame women for the assaults against them.

Psychologist Farah Shash, of the Nadim Center for Victims of Violence, says Egyptian society is becoming increasingly conservative and patriarchal.

Prominent Egyptian religious and political leaders, like Salafist sheikh Gamal Saber, a founder of the al-Ansar Party, have expressed just those sentiments.

“What else does she expect when she walks down the street with tight, revealing clothes in a provocative way?  What else can these men do?” he asked.  While Saber argues he does not want to say harassment is a natural response, he adds, the men “are not entirely to be blamed.”

The government has tried to distance itself from such statements, with President Mohamed Morsi launching an initiative to advance and protect women’s rights.

But rights groups say the effort is more rhetoric than reality.  And following the Muslim Brotherhood’s recent rejection of a proposed U.N. declaration condemning violence against women, even the rhetoric is not strong enough.

Morsi, who came from the Brotherhood, is part of an Islamist ascendency in Egypt that draws on fundamentalist strains of Islam that rights’ advocates say are not in keeping with Egyptian traditions.

“We have lots of open-minded sheikhs who teach us about Islam and women, and we do not find any controversy between women’s rights and lots of interpretations of Islam,” said Nehad Abo el Komsan, director of the Egyptian Center for Women’s Rights.

She says political leaders focus on restricting women’s rights to divert attention from such pressing problems as the economy, and many women are beginning to see through it.

“They start to understand that we want you [the government] to solve our problems, not to talk about a woman’s veil, or a woman’s niqab, or a woman’s body.  And we want for you to have job opportunities for all,” she added.

Egypt’s economy has suffered greatly since the revolution, and rights advocates argue harassing and marginalizing half the population is not only unfair, it is something the country can ill afford.